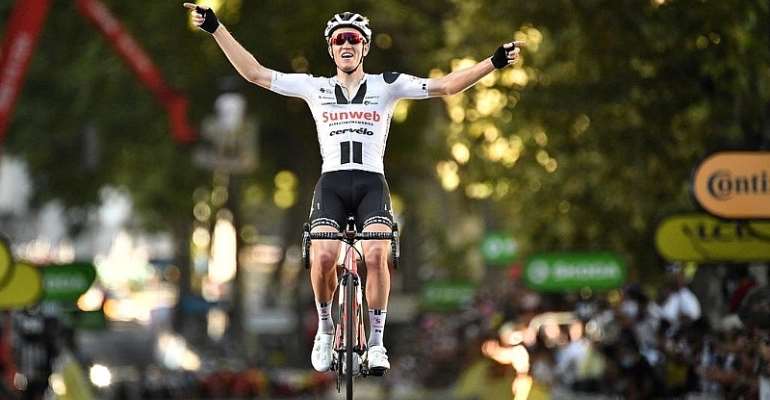 Soren Kragh Andersen timed his effort to perfection to win the 14th stage of the Tour de France, a 194.5-km ride from Clermont-Ferrand on Saturday.

Roglic, a former ski jumper, remained 44 seconds ahead of his fellow Slovenian Tadej Pogacar, and 59 clear of Egan Bernal, the defending champion.

Triple world champion Peter Sagan regained some ground on points green jersey Sam Bennett when he finished fourth after the Irishman was dropped early on and could not fight for victory in the finale.

Bennett, who is looking to become the first Irishman since Sean Kelly in 1989 to win the green jersey, leads with 262 to Sagan's 219.

Sagan is hoping to claim a record-extending eighth green jersey but he has been far from his best this season.

His Bora-Hansgrohe team set a fast tempo on an early climb to split the bunch and Bennett found himself trailing and unable to come back despite a long chase with his Deceuninck-Quick Step team mates, but Sagan could not deliver a win.

There were multiple attacks in the short climb up to the Col de la Croix Rousse in the finale, but Kragh Andersen was patient and he jumped away at the right moment.

“I waited for the right moment. Some riders attacked but I waited. When I saw that there was a quiet moment, I went,” said Kragh Andersen, who gave Sunweb their second victory in this year's Tour after Swiss Marc Hirschi won the 12th stage in Sarran on Thursday.

“When I saw Marc win and I when I look at the dynamic of the team, it's great. We talk to each other and we're developing as a team.”