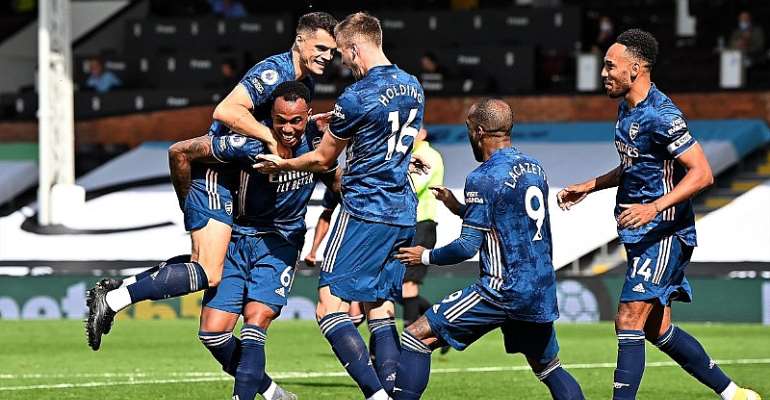 GABRIEL OF ARSENAL CELEBRATES WITH HIS TEAM MATES AFTER SCORING HIS TEAM'S SECOND GOAL DURING THE PREMIER LEAGUE MATCH BETWEEN FULHAM AND ARSENAL AT CRAVEN COTTAGE ON SEPTEMBER 12, 2020 IN LONDON, ENGLAND. IMAGE CREDIT: GETTY IMAGES

Debutants Willian and Gabriel inspired an impressive Arsenal to a comfortable 3-0 win at new-boys Fulham in the opening game of the new Premier League season.

Alexandre Lacazette became the first player to score the very first goal of two Premier League seasons when he bundled home a scrappy opener with just fine minutes on the clock to give Arsenal the lead in the sunshine in the capital.

After the break, the fluid Gunners stepped it up a gear, with Willian finding Gabriel with the first of his two assists. The Brazilian defender climbed highest to head home on debut to make it two in the 49th minute before Willian then picked out Pierre-Emerick Aubameyang, who brilliantly arrowed the ball into the top corner to make sure of the win before the hour mark.

While Fulham provided meek opposition on their return to the top flight, this was seriously impressive from Arsenal, who picked up on where they left off from last season and built on their Community Shield win by making the perfect start to the new campaign.

There was no place for Mesut Ozil and Emiliano Martinez in the Arsenal squad as their futures remain up in the air, with debuts handed to Willian and Gabriel, with the latter getting away with an early lapse in concentration to allow Aboubakar Kamara in, Bernd Leno coming to the rescue.

That reprieve was made all the more sweet as Lacazette pounced on the loose ball after Granit Xhaka and Willian’s shots had been kept out to give Arsenal the lead from close range.

Fulham, offered very little is response as an attacking force, and needed to start the second half well, but Gabriel’s goal just four minutes after the interval from a Willian corner killed off the Fulham resistance.

Not to be outdone, on the end of a fine, flowing move, Aubameyang picked up Willian's long ball, shifted the ball onto this right foot, before scoring a goal which has become his trademark, curling the ball powerfully into the top corner to put the icing on a excellent performance.