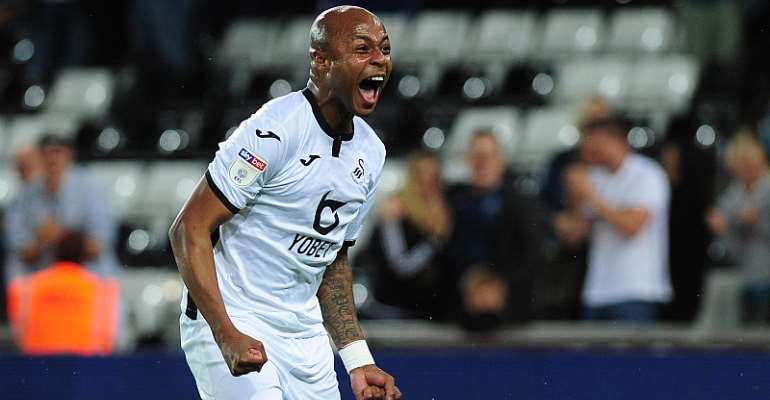 On the night of July 29, 2020, Swansea City lost 3-1 away at Brentford, and ultimately saw their hopes of gaining promotion to the English Premier League thrown into the mud.

After a short pre-season than usual as a result of the Coronavirus pandemic, the Swans are set to return to action in the English Champions to give it another go in the quest to earning the right to play top-flight football once again.

Leading the charge is one man; Andre Ayew, adored by fans of the Welsh club and a household name in his native country, Ghana.

Last year, the 30-year old forward returned from a loan spell in Turkey to carry Swansea City through what transpired into an outstanding campaign in the English Championship.

In every step of the way, the attacker contributed with goals, assists, and to a larger extent his leadership qualities after he was named the vice-captain of the team.

Forming a formidable attacking force with teenager Rhian Brewster, Andre Ayew contributed most of Swansea City’s goals in the Championship and tied with Matt Grimes as the top assist providers.

In all competitions, Ayew’s numbers speak volumes and underline his importance to the squad put together by manager Steve Cooper.

As demonstrated from statistics provided by Modernghana Sports partners SofaScore, Ayew carried Swansea every step of the way last season.

Beyond the stats, he singlehandedly changed games for his team when they needed a hero and led the charge after the Covid-19 break when the team required a revival to qualify for the playoffs.

Personally, for the Black Stars captain, the 2019/2020 season was arguably his best, playing the poster boy role for Swansea City and improving on his numbers from the previous season where he spent the campaign on loan in the Turkish Super Lig with Fenerbahçe.

Should the trend continue and Andre Ayew build on his form from last season, Swansea City should stand a better chance of gaining promotion to the English Premier League at the end of the season.

That notwithstanding, the Swans cannot afford to overly rely on the veteran. Manager Steve Copper needs to get other players to step up their game especially in the attack.

In the absence of striker Rhian Brewster who has returned to his parent club Liverpool, others will need to show up and contribute to goals and assist to complement the efforts of Andre Ayew who is being tipped to lead the dreams of his club.

This summer, Swansea has secured the services of Jamal Lowe from Wigan Athletic to provide a squad boost. He enjoyed a fairly good spell last season where he scored 6 goals and provide 5 assists after featuring in 46 games.

If his link up with star man Andre Ayew suffice, Swansea City could have a chance of even meriting automatic promotion to the English Premier League at the end of the 2020/2021 Championship season.

On the opening weekend of the season, Swansea City is visiting the Deepdale grounds today to take on Preston North End F.C.

A fit Andre Ayew is expected to lead the lines for his club alongside Jamal Lowe.