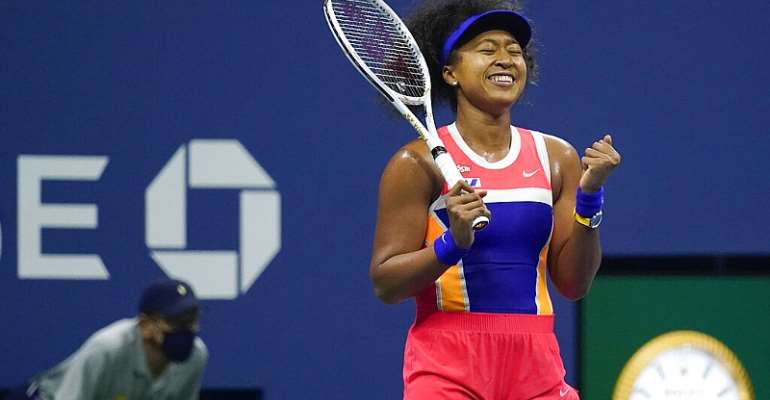 Osaka, who won the 2018 title, edged an enthralling first set with a dominant tie-break before Brady impressively rallied to force a deciding set.

Osaka backed up her maiden Grand Slam victory in New York with another triumph at the Australian Open five months later but then struggled to cope with the increased pressure of being the world's top-ranked player.

Now, after dropping to 10th before the coronavirus pandemic struck, she has returned looking again like a player who could go on to dominate the sport.

Osaka has matured as a person and player since her first Grand Slam wins, with new coach Wim Fissette acknowledging this week that her activism against racial injustice and police brutality in the United States has added further fuel to her mission of winning in New York.

A supreme confidence and a steely resolve has been key to her march through to the semi-finals, where she came up against an opponent with similar traits.

Both players excoriated the ball from the start on a near-deserted Arthur Ashe Stadium, hitting it cleanly and crisply in an opening set where both barely made a mistake.

Brady's path to a maiden Grand Slam semi-final had been unusual compared to most of her peers, having played in the American collegiate system before a relatively late progression to the WTA Tour.

Wayward hitting in the first-set tie-break appeared to suggest the magnitude of an occasion like she had never experienced before may have got to the 25-year-old.

However, she bounced back impressively in the second set as she reset mentally to rock Osaka when the two-time Grand Slam champion's level momentarily dipped in the eighth game.

Brady pounced for the break and then served out the set to deservedly take the match into a decider.

Both players had played arguably their best tennis of the tournament in the opening two sets and the only question going into the third was whether that level could continue.

Brady had not faced a break point in the opening two sets but suddenly saw her serve pinched from nowhere in the fourth game of the decider as Osaka took control for a 3-1 lead.

Nerves did creep in for Osaka as she tried to serve out victory, her ball toss going awry and leading to one double fault for 15-30, only to steady herself and clinch the win in two hours and 11 minutes.

Before and after each match, Osaka has been a wearing mask bearing the name of an African-American who has been killed, as she highlights racial injustice