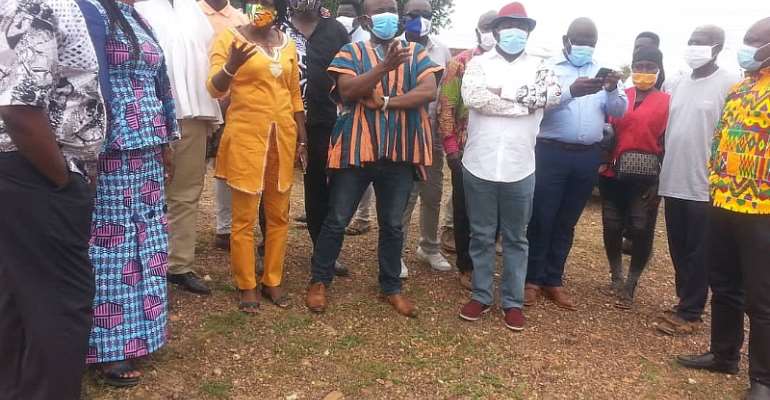 This statement was made by Professor Peter Twumasi, the Director-General of National Sports Authority at Akim Oda when he paid a working visit to the Birim Central Municipality to assess the factors hindering the development of sporting activities.

Inspecting the current status of Akim Oda Sports stadium, Mr. Twumasi emphasized that the government through the Ministry of Youth and Sports has Oda stadium at heart and it is working assiduously to ensure that the Stadium is re-constructed. He added that the visit is to conduct among other things the feasibility Study.

Mr Twumasi described the Akim Oda Sports stadium as being the center stage of the Town and said when it is put into use could contain 5,000 seat capacity to generate revenue for the government to embark on other infrastructural projects to improve the living standard of the people.

He, however, commended the Municipal Chief Executive including other opinion leaders for safeguarding the said stadium till this far.

According to him, Ghana has confronted quality sporting facilities over the years and such facilities have had negative cascading effects on the developmental activities of the successive governments. He hinted that the government under the leadership of Nana Addo Dankwa Akuffo-Addo has the conviction to construct 44 new ultra-modern sporting facilities to be added to the already existing ones and stressed that out of the said 44, 10 of them have been completed and would encourage the teaming youth to explore their sporting talents to boost Ghana’s economy.

Mr. Twumasi indicated that the said facilities would be financed by the government through the Ghana National Petroleum Corporation (GNPC) and among others. He further stressed that the projects when completed would also help the country host African football competitions and called on all meaning Ghanaians to support the government implement its programs.

On the achievements of the Ministry of Youth and Sports under the Nana Addo Dankwa Akuffo Addo’s administration, Mr. Twumasi said a number of sporting facilities have been constructed and renovated.

These, he said include the Accra sports stadium, Asipong sports stadium, and others, and stressed that more sporting facilities would be extended to the newly created regions to ensure the government’s equitable distribution of resources.

In a message, the Municipal Chief Executive (MCE) for Birim Central Mrs. Victoria Adu expressed gratitude to the government through Professor Peter Twumasi for taking the bold decision to carry out a feasibility study on Oda Sports Stadium to enable the said stadium to be re-constructed to enhance the sporting activities in the Municipality.