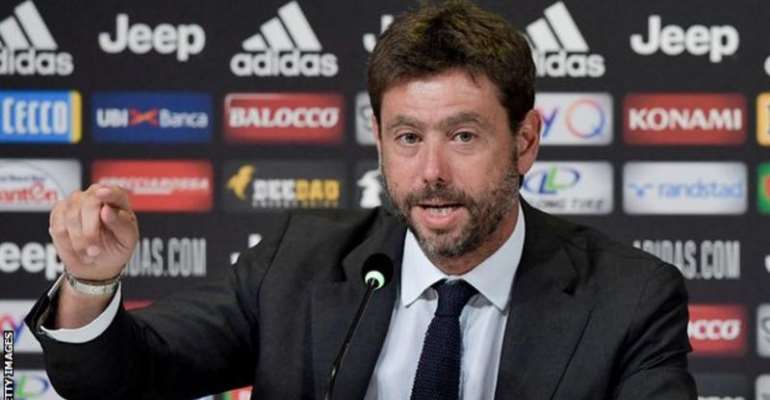 Agnelli is chairman of Juventus and the European Club Association

Football shut down across most of Europe amid the coronavirus pandemic and then adapted key competitions.

But games in empty stadiums, rebates to broadcasters and reduced sponsorship will continue to hurt clubs financially, according to Juventus chairman Agnelli.

"I still think we are in the middle of crisis management," he said.

"There are estimates that say we are going to see a shrinking of the valuations of the transfer market of 20-30%, and that is evidently less money circulating.

"I fear some of the big clubs will suffer losses on their own that are bigger than some of the confederations will lose across the world. The vast majority will bear deep scars from this crisis."

Agnelli was speaking at the general assembly of the European Club Association, where Uefa president Aleksander Ceferin confirmed 20,000 spectators would be allowed to attend the Super Cup final between Champions League winners Bayern Munich and Europa League winners Sevilla at the Puskas Arena in Budapest on 24 September.

The latter stages of both competitions were played behind closed doors and as one-off games rather than as two-legged ties.

Ceferin said: "Who could imagine at the beginning of 2020 what we would have seen? Six months ago everything was shutting down, and now my friends we are back.

"We cannot say everything is normal, but it will be normal soon."

But Agnelli claims European governing body Uefa will lose about 575m euros (£519m) in income from international club competitions - money he says would have normally been distributed to clubs.

He added: "We are looking at top revenue decrease of approximately 4bn euros (£3.6bn) in the next two years and according to Fifa, 90% of those top-line losses will be borne by clubs."