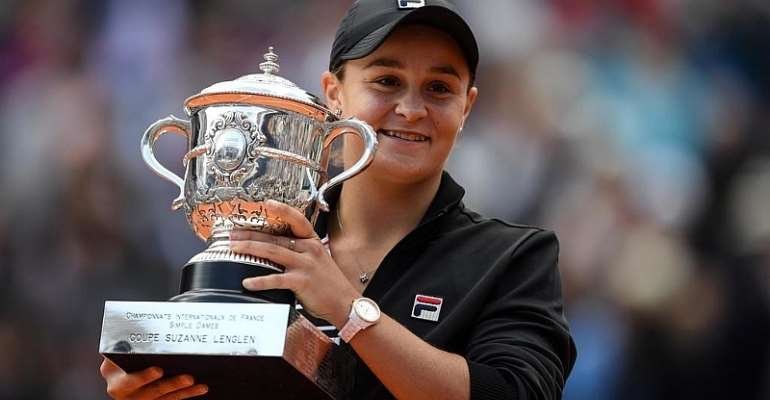 Tennis world number one Ashleigh Barty announced on Tuesday that she will not defend her women's singles title at the French Open which starts in Paris on 27 September.

The 24-year-old Australian cited fears over the coronavirus for her decision as well as a lack of proper training.

Barty claimed her first Grand Slam title in June 2019 when she beat Marketa Vondrousova from the Czech Republic in straight sets to hoist the Coupe Suzanne Lenglen.

"Last year's French Open was the most special tournament of my career so this is not a decision I have made lightly," Barty said on social media.

"There are two reasons for my decision - the first is the health risks that still exist with Covid.

"The second is my preparation, which has not been ideal without my coach being able to train with me due to the state border closures in Australia."

Difficulties
Barty, who is based in Brisbane, has been unable to link up with her coach, Craig Tyzzer, who is nearly 1,400km away in Melbourne and unable to travel as the city battles a second-wave of the coronavirus.

On Monday, the French Tennis Federation (FFT), which organises the French Open, announced that all players would be housed in two hotels and tested regularly for the coronavirus.

Former champion Serena Williams, who has a history of lung problems, said she would speak to the FFT before making a decision on whether to compete.

"I'm going to have to make the best decision for my health," Williams said after making the quarter-finals at the US Open.

Barty withdrew from that tournament in July citing her concerns over travelling during the coronavirus pandemic. Soon after, the women's world number two Simon Halep pulled out of the US Open mentioning the same concerns along with the men's defending champion Rafael Nadal.

Both he and Halep are expected in Paris where they will be seeking a second and 13th title respectively.

"I wish the players and the French Federation all the best for a successful tournament," added Barty.