Jones Back In Charge 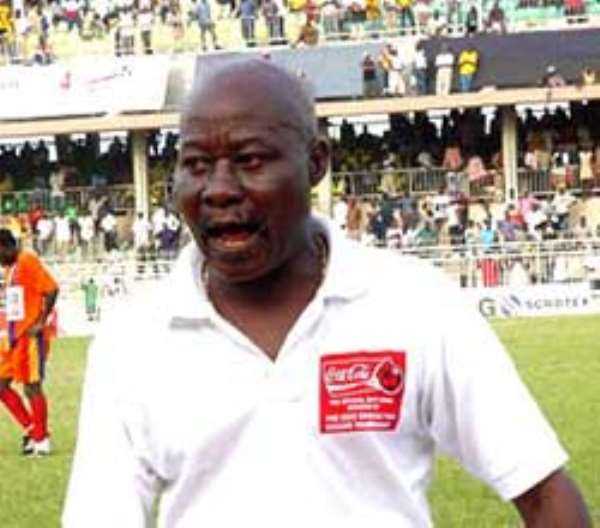 After losing out in the race for the Black Star coaching job Jones Attuquayefio puts the disappointment behind him and now turns his attention to seeking Glory in his designation as coach of the national under 23 side the Black meteors.

The veteran coach who was hotly tipped for the Stars job posits that while he feels he was the right man for the job after being short listed together with eventual winner Claude Le Roy in a suspense filled finale, he knows his world class qualities stand to be proven elsewhere. And that for him comes in not only attempting to reverse Ghana's checked football fortunes at the Olympics, but more importantly build the team that will supply the resources to spearhead Ghana's next World Cup adventure in South Africa in 2010.

'Sir Cecil', who also coaches Dansoman-based Liberty Professionals, will have his hands full as he tackles the responsibility of taking the Black Meteors to the 2008 Olympic Games in China where Ghana will attempt to capture an elusive Gold medal.

Despite going down as the first African nation to win a medal of any coluor in Olympic football tournament in the 1993 Barcelona Olympics, Ghana's achievements pale against the more illustrious gold medal runs of Nigeria- Atlanta 1996 and Cameroon-Sydney 2000. At the last Olympic Games in Athens a star studded meteors cast featuring many of the actors in Ghana's impressive world cup debut at Germany 2006 faded badly to crush out of the first round. The team comprising Stephen Appiah, Sule Muntari, Asamoah Gyan among others then under Portuguese Mariano Barreto failed to maintain the momentum of an impressive opening display against Italy to fall to Japan in a crucial group decider.

Now, Attuquayefio brings all his experience to bear as he tackles the enormous Challenge of building the latest 'junior Black Stars' to make an assault on the Olympic title, a challenge he relishes.

'Of course it is a competition we are yet to win and obviously the target is to go as far as possible, but we have to first qualify'

The meteors drew a by in the preliminary stage of the qualifiers which means they only get to see action in February but Attuquayefio has no intention of sparing time before getting down to business, he says the teams will move into camp at the end of September to kick start early preparations for next year's qualifiers.

'We dont have to rest till the last minute before doing things. I'm consulting my management team and hopefully the team would be in camp by the end of the month.'

'We started with the first division teams, now we will assess the materials in premier division sides after which we will give the chance to the immediate past U- 20 who should graduate to the U-23 Level'. Coach Attuquayefio coached the national Juvenile team the Black Starlets to a bronze medal at Newzealand in 1999. He also led Hearts to two successful continental titles in five years making the Phobians the only Ghanaian side to have lifted both the Champions League (2000) and Confederations Cup (2005).

The coach who has also trained the Benin national side, and remains the number one choice for several clubs in the country, is a holder of FIFA Management Advance Course, Preliminary and Advance Coaching Diploma from Brazil and Germany respectively.

I'm not bothered about a likely coup, I worry of possible up...
15 minutes ago