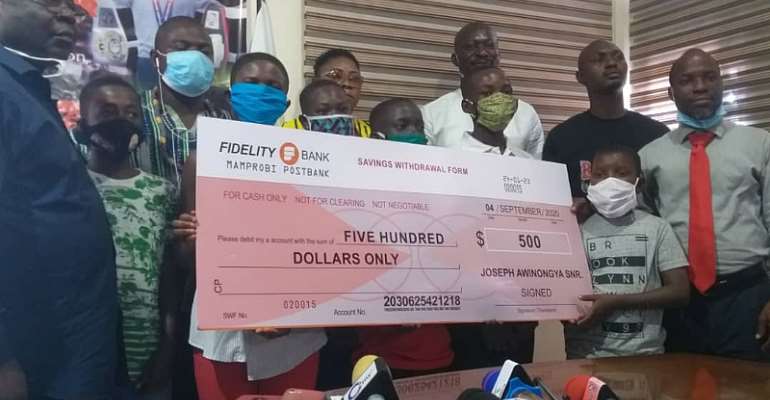 Young boxing rising super star, Joseph Awinongya Jr. on Friday September 4, 2020 was showered with heaps of praises and blessings from the chief and people of Ashaiman when he donated $500 to the Motherly Love Foundation, an NGO which caters for orphans who by no fault of theirs have contracted HIV.

The donation took place at the Ashaiman Municipal Assembly office where the current Chief Executive, Hon Albert Okyere commended the America based boxer and his parents for their wonderful gesture.

He said the young boxer has done very well to remember his roots and willing to share makes him special among his peers.

He prayed that Awinongya will succeed in life and in his chosen discipline as a boxer.

Hon. Ibrahim Baidoo, the immediate past Municipal Chief Executive also congratulated the boxer who has won many competitions in the USA including seven times national championships and hoped that the people of Ashaiman would follow his exploits by building a boxing gym in his memory.

He noted that Awinongya is now an Ambassador, so the people of Ashaiman are going to take inspiration from him as he has set the pace.

Reverend John Azumah, founder of the NGO who together with his wife received the donation thanked the Awinongya family and promised that the Motherly Love Foundation will utilize the money well.

He called on other bodies and individuals to support the children who are orphans to make a good living.

The chief of Ashaiman, Nii Annang Adjor also blessed the super star kid boxers and prayed that he would realize his hearts desires and become a worthy champion in future.

Carl Lokko, acting Technical Director of the Ghana Boxing Authority (GBA) who is chief coach at the Bronx Gym at James Town also commended Awinongya and promised to support the people of Ashaiman if they get a boxing gym.

He noted that the GBA welcomes the idea to have good boxers from all over the country and not only Bukom. His son, Hakeem Lokko was also introduced at the ceremony.

Present to entertain guests were members of the Ghana Boxing Union (GBSU) led by Sammy Gyan who thrilled with jama songs.

He is energized by his loving dad Joseph Awinongya Sn. a former boxer, now trainer who always inspires him to help others.

So far they have supported some juvenile boxers in Ghana, a woman named Paulina who was seriously ill for some time and now the kids living with HIV.