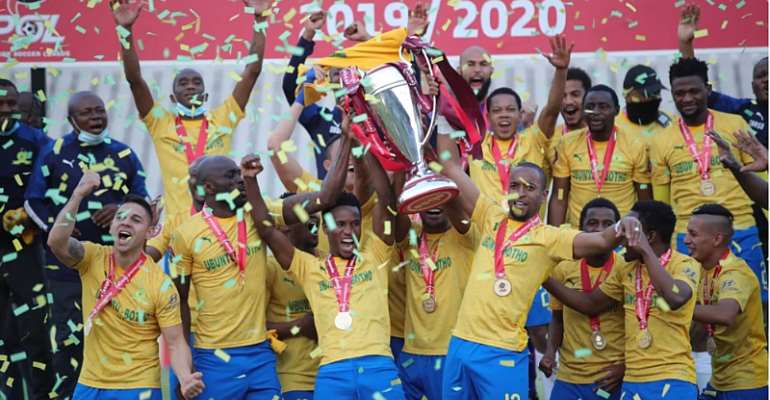 Mamelodi Sundowns pulled off one of the most jaw-dropping comebacks in South African history, winning the Premier Soccer League on the last day of the season.

From the minute the match started, all the permutations were strongly against Pitso Mosimane guiding Sundowns to a third straight league title, and the club winning their 10th championship in history.

Among the extra-ordinary things Sundowns needed to do was winning by a three-goal margin.

And that became the tall order when Sundowns defender Ricardo Nascimento missed a penalty for the Brazilians early on.

A few minutes later, in the other championship match, Khama Billiat controlled well from a Samir Nurkovic pass, then fired a low drive with his left past Baroka FC keeper Elvis Chipezeze.

Just before the first half ended, Chiefs were on 59 points, with Sundowns destined to head into the break trailing Chiefs by two points.

If the match had ended in the 44th minute, Chiefs were easily taking the crown they last won in 2015 by two points.

Everything changed on the stroke of halftime, when Lebohang Maboe, a player who struggled for form for more of the season, scored to make it 1-0 to Sundowns, giving the Brazilians a sniff at the title.

That meant Sundowns needed to score three more goals in the second half to win the league.

As the second half started, Chiefs were looking for a second goal in their game, and Sundowns pushed hard to score as many as they can to improve their possibilities.

But the Brazilians was helped tremendously on the 59th minute of the Chiefs against Baroka game when Mozambican Manuel Kambala made it 1-1 for Baroka.

That effectively meant Sundowns moved to the top of the log, leading Chiefs by two points.

The fact that Sundowns were now on top with more points did not stop Mosimane’s side from pushing for more goals, and with the chances they created, they could have scored five more.

As Chiefs were struggling to break Baroka’s resistance, Maboe sealed his brace with a neat finish to win the league for Sundowns.

As Sundowns players and staff were celebrating a title in a season that they hardly had the lead, Chiefs players and their coaches were weeping, trying to make sense of how they let a title they were looking so good to win slip in the last moment.

Amakhosi had led the standings for a full year, and at some point were 13 points at the top.

Other than Sundowns winning the league, Baroka’s 1-1 draw with Chiefs meant they were safe from relegation, while Black Leopards’ loss to the Brazilians will force them to play in the promotional/relegation play-offs.

Polokwane City were relegated, and will next season play First Division football.

Orlando Pirates, a team that had a mixed season, finished third on 52 points, beating SuperSport United on goal difference to book a place in the CAF Confederation Cup.