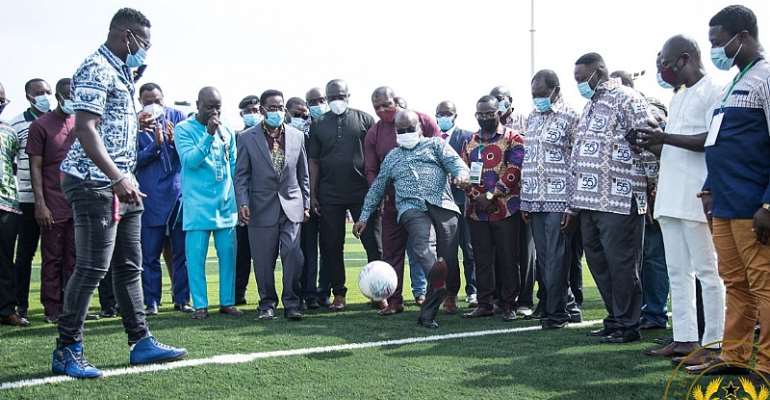 The astro-turf constructed at the cost of nearly 4 million Ghana Cedis from the university’s Internally Generated Funds.

The pitch comes with a FIFA standard pitch, 5,000 seating capacity, floodlights, changing rooms and offices for the school’s sports directorate.

President Akufo-Addo at the occasion said the project formed part of government’s efforts to improve sports infrastructure across the country.

“The government, through the Ministry of Education and the Ministry of Youth and Sports, is committed to promoting sports in our schools and is fully supporting corporate initiatives in this directive.

“The provision of the requisite infrastructure to this end is critical if our nation is to regain its enviable place in sports on the continent and in the world,” he said.

The contractors for the UPSA astro-turf is Wembley Sports construction and their CEO, Robert Coleman, said the project is the best astro-turf they have produced.

“This is the first time we have one a project like this for a university and it is very unique. When you look at the spectator stand, the architecture is different, the floodlight is an improved version of what we have done.

“We have decided to put sprinklers under the turf so that the resilience of the ball can be enhanced,” Coleman said.

Wembley Sports Construction are the leading contractors of astro-turfs in the country and have worked on facilities including the famous Kotobabi Wembley, the La Astro-turf, Madina, among others.

Former Black Stars players, Asamoah Gyan and Laryea Kingston, as well as President for the Ghana Football Association, Kurt Okraku were all present at the event.