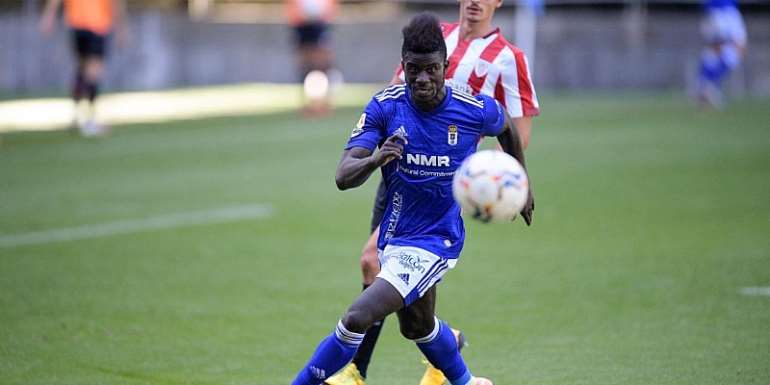 Ghanaian international Samuel Obeng was on target on Friday when his Real Oviedo outfit drew 2-2 against Athletic Bilbao in a pre-season friendly match.

With just a week and a few days to the start of the 2020/2021 football season in Spain, the two clubs are looking to wrap up preparations in pre-season.

At the Carlos Tartiere grounds today, Real Oviedo locked horns with Athletic Bilbao for a warm up exercise to give managers of both teams the opportunity of assessing their players.

What ended as a good exercise produced four goals with each team netting twice. In the first half, an own goal from Ander Capa handed the Spanish Segunda outfit the lead before Oier Zarraga restored parity for Athletic Bilbao.

Returning for the second half after the break, the La Liga club looked sharper and went on to take the lead for the first time in the game on the 55th minute through Asier Villalibre.

The smiles of the players will only last 5 minutes though as Ghana’s Samuel Obeng also registered his name on the scoresheet to draw level for Real Oviedo.

The young striker has scored twice in pre-season already and looks in good shape ahead of the start of the new season.