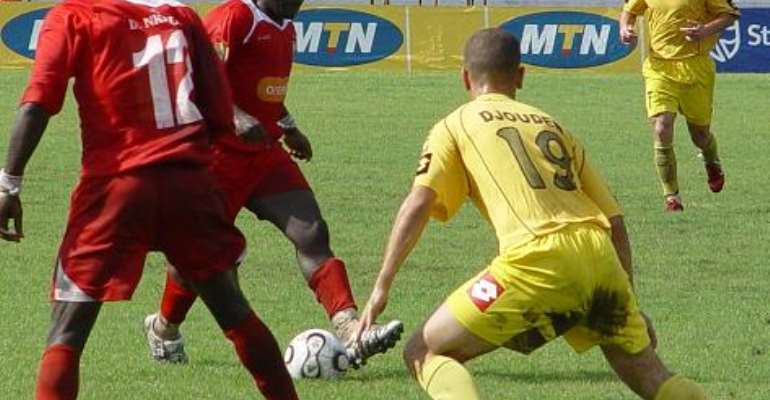 After his transfer from Obuasi Goldfields (now Ashanti Gold) to Kumasi Asante Kotoko in 2002, it did not take Nana Arhin Duah long to flaunt his goal scoring prowess to the admiration of the numerous fans of Asante Kotoko.

In most of the pre-season matches the club played at what was then known as the "Fast Track" Kumasi Sports Stadium, Nana Arhin Duah, then popularly known as "Shaggy" romped in goals without sweat. He always surrounded the fans with a web of ecstasy, courtesy his goals.

To many defenders, he was a nightmare. And once he came face to face with the goaltenders, he looked more of a monster than a mere striker. Goal scoring was an ability he came to Kotoko with, and that compelled fans of the Kumasi club to heap a lot of encomiums on him.

And for a team that was then resolute at the rear, astounding and classy in the middle, but bereft of devastating strikers, Arhin Duah's recruitment to their fold was a prudent move aimed at effectively putting to an end their goal famine. They called and still call him, "Nana Obua Nipa", which literally means "a redeemer" in recognition of his goal scoring prowess, which saw Kotoko amble from victory onto victory.

However, four seasons after joining Kotoko and initially shining in grace, Arhin Duah lost a chunk of his monstrous goal scoring trappings, and the fans who once adored him stopped at nothing, bringing him under a barrage of criticism. Indeed, the criticism was not without cause or basis. The fans had every reason to question his goal-shyness. In their view, it was utterly incomprehensible for a striker to go almost a season without stabbing a ball into opponents' net.

But through it all, Arhin Duah has maintained some level of unflappability and equanimity of mind. The death of his daughter at a time he was on duty for Kotoko, and later the departure of his wife from the land of the living, both exacerbated his pain. But he proved equal to the task, scaling those hurdles, and minding his own business on the green turf, and perhaps looking forward to the day he will have Ghana football at his feet.

At the Obuasi Len Clay Stadium last Saturday, where Asante Kotoko again lent credence to the fact that they have no equals when it comes to conceding early goals in this year's CAF/MTN Champions League, it was the apparently dimming Nana Arhin Duah, who spared their blushes, hooking in two goals, one of which was an equalizer, and the other the match winner for Asante Kotoko to give his topsy-turvy football career as well as Asante Kotoko's chances in the competition a new lease of life.

From whichever standpoint one looks at it, Arhin Duah's brace in last Saturday's game has enabled him breathe again, while enabling Kotoko to still be in contention for a semi final berth in the competition. But that ticket can be secured only if Arhin Duah and his teammates prove they can be strikingly and remarkably lethal against CS Sfaxien in the last group match of the Champions League in Sfax this weekend.