US Open 2020: Andy Murray Fights Back To Beat Yoshihito Nishioka 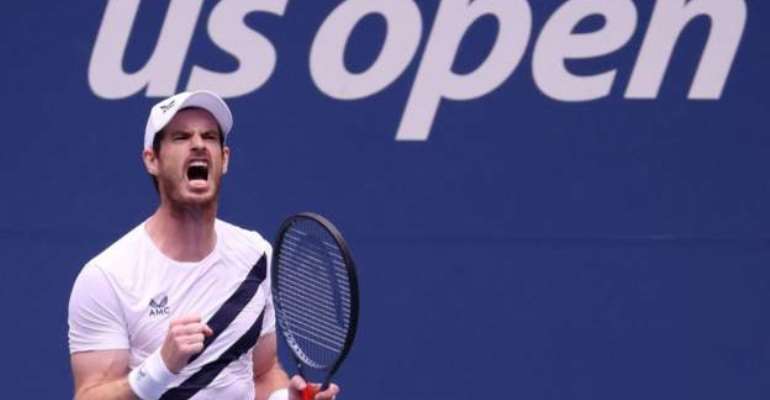 Andy Murray staged a stunning comeback against Yoshihito Nishioka in the US Open first round on his long-awaited return to Grand Slam singles tennis.

The Briton, whose last major singles match was at the 2019 Australian Open before career-saving hip surgery, started flat and dispirited.

But he found his fight and saved a match point to set up an epic win.

The Scot, who eventually claimed victory in four hours 39 minutes, will face Canadian 15th seed Felix Auger-Aliassime in the second round.

Playing in an empty and quiet Arthur Ashe Stadium - a far cry from the noisy stage where Murray won his maiden Grand Slam title in 2012 - his early despondence was all the more noticeable.

In his BBC radio commentary David Law said "Andy Murray does not look like Andy Murray", such was his manner, as he quietly trudged around with shoulders slumped as he was outplayed.

During the first two sets Murray barely berated himself for his five double faults and 30 unforced errors, seeming almost resigned to his fate before his energy levels - and his voice - began to rise towards the end of the third set.

And that was when Andy Murray began to look exactly like Andy Murray.

A roar greeted the blistering forehand that gave him two set points in the third-set tie-break and then he let it all out with a trademark "come on!" when Nishioka netted a backhand on the second.

The character that took him to three Grand Slam titles and the world number one ranking before his body so cruelly let him down shone through as he saved a match point with a crosscourt backhand at 6-5 in the fourth.

It would be nearly an hour later until he himself carved out his own match point, needing to recover from a break down in the fifth game of the fifth - which he did with a sumptuous backhand lob in the very next game - to stay on track.

When Nishioka sent a backhand out on match point, Murray completed his 10th career comeback from two sets down and answered any lingering questions about whether he could still be competitive on the biggest stage.

On his last Grand Slam singles appearance in January 2019, Murray had broken down in tears when he said he feared he might have to retire because of a hip injury.

But he went on to have surgery later that month and just five months later was back in action, playing doubles and winning the Queen's title with Feliciano Lopez.

He played doubles and mixed doubles at Wimbledon that year and then made his singles return on the tour in August 2019.

He skipped last year's US Open to focus on his singles return and was then ruled out of January's Australian Open with a pelvic injury. Further chances to return to the Grand Slam singles stage were then lost because of the coronavirus pandemic.

He has been ticking off the 'since surgery' milestones ever since - a first singles title (October), a first win over a top-10 player (last week) and now he has crossed off three more.

Not only his first Grand Slam singles match, but also a first win in one, and a first five-setter.

"I'm tired. My toes are the worst part I think," said Murray, who had treatment on his toes at the start of the fifth set. "The big toes on both sides are pretty beat up. I did alright physically.

"At the beginning of the match I was apprehensive about playing a long match because I hadn't played one in a while.

"I was sort of pacing myself. Once I got two sets down I had to start putting the after-burners on and managed to get through."

He is the first player to return to singles after a hip re-surfacing operation, where the femur head is capped with metal and put into an artificial socket.

He will now find out how his new body copes with the recovery from a five-set thriller at a Grand Slam.

And he knows exactly what he needs.
"They have an ice bath in the locker room and they said it was for emergencies," Murray said.

"For me this is an emergency right now. I'll ask and see if they'll allow me to use the ice bath. If not I'll try to get back to the hotel as quickly as I can.

"That's by far the most tennis I've played since the Aussie Open in 2019."

Takoradi kidnapping conspiracy: We will establish the truth ...
50 minutes ago