CAN 2008 Global launch, a night of pure African expression 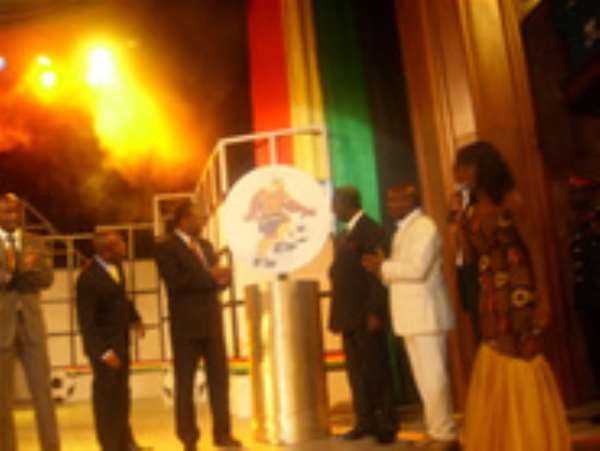 The Cup of African Nations, of Ghana's CAN 2008 was a night of pure African expression as every bit of the occasion represented true African culture blended with sports.

Such was the description that can be given to the first ever Global Launch of the 2008 African Cup of Nations held at the Accra International Conference Centre (AICC) on Friday night.

Most parts of the occasion portrayed the African culture as the beats of the fontomfrom drums, the sounds of the horn, xylophone, flutes and other African musical instruments spiced up the night with African sounds to make the occasion a unique one.

The occasion was a night, which saw true African music and fashion on display led by ace musician Amandzeba, Nat Brew with his popular "Wogbe Gyeke" song, meaning we have come from afar, with renowned fashion designers Mawuli Okudzeto and Kofi Ansah thrilling the fully packed AICC with African design fashion shows.

Watched by millions through Africast, an international television station in over 25 African countries and graced by Ghana's President John Agyekum Kufour, Alhaji Issa Hayotou, President of the Confederation of Africa Football (CAF), Ministers of State, Parliamentarians, members of the Ghana Football Association (GFA) and other high dignitaries, provided Ghanaians and Africans a lot to expect in the 2008 Nations Cup.

Launching the programme, President Kufour said the 2006 World Cup in Germany has proven that sports and for that matter soccer can heal political rivalry in the country, hence the need to use it as a tool to promote unity.

President Kufour said success can however be achieved through the use of fair means, a campaign which has been at the centre of every game, adding that "soccer is best enjoyed when it is fair."

He said that the attitude of the "win at all cost strategy" must be avoided, adding that soccer need to be played in a fair atmosphere.

The President said "Such will be the atmosphere that is to be expected at the 2008 Nations Cup as professionalism would be at the highest level in the competition because it is the only way football can progress on the continent."

Alhaji Hayatou said every Cup of Nations is always better than the previous one and challenged Ghana to live up to expectation by making the 2008 event, a historic one.

He said the 2006 Cup of Nations was watched by over five billion people across the world and called on Ghana to channel all efforts towards increasing the Television viewership.

The CAF President commended Ghana for putting up an excellent organisation so far adding that the nation should not relent on its efforts but work harder to make the 2008 event, which is next competition become a success.

President Kufour together with Alhaji Hayatou and Kwesi Nyantakyie President of the GFA, supported by the some of the soccer greats in football like Abedi Pele Ayew, Tony Baffoe, members of the 1992 Black Stars squad as well as Ghanaian born, French Star, Marcel Dessailly unveiled the Mascot for the competition.

The Mascot has been framed in the form of a player dressed in the national colours making a move with a ball.