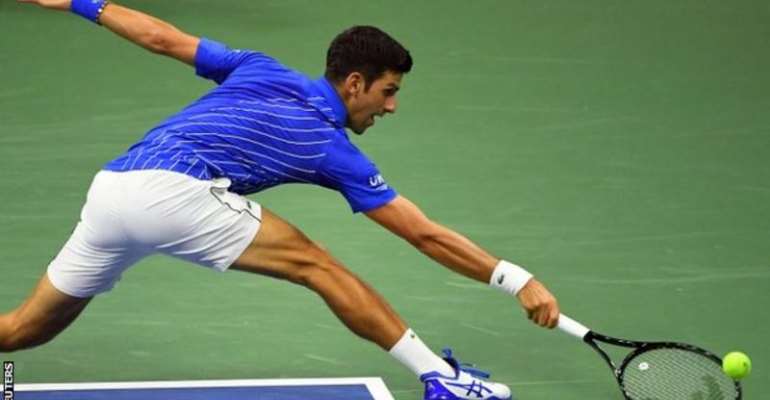 World number one Novak Djokovic began his pursuit of an 18th Grand Slam title with a straight-set win over Damir Dzumhur in the US Open first round.

Djokovic is seeking to capitalise on the absence of fellow greats Rafael Nadal and Roger Federer in New York.

Among those likely to challenge him are Alexander Zverev and Stefanos Tsitsipas, who also won their openers.

Both of those players are chasing a maiden Grand Slam title, with Spain's defending champion Nadal not playing because of coronavirus concerns and Swiss 20-time major champion Federer missing following knee surgery.

Djokovic will play Kyle Edmund in the second round after the British number two came from behind to beat Kazakhstan's Alexander Bublik.

It will be the seventh meeting between the two - and their second at Flushing Meadows - with Edmund's only victory over Djokovic coming on the Madrid clay in 2018.

"He has a really good serve and forehand, those are two big weapons," said Djokovic. "I've had some really good matches in the past against him at Wimbledon, a tough four-setter a few years ago.

"He doesn't feel so much pressure playing on the big court, obviously it's different circumstances here, but he actually likes the challenge.

"His results were kind of up and down a little bit but I think he does have the game and the potential to be in the top 20 without a doubt, where I expect him to be soon.

"It's going to be a tough one, I'm sure he has not so much to lose in that match and it's important for me to start off well."

After an assured start where Djokovic took the first set in just 24 minutes, the top seed found he was not going to get everything his own way as Bosnia-Herzegovina's Dzumhur began to exert some pressure.

Djokovic was broken in the fourth game of the second set and saved three break points on his next service game but stepped up a gear to regain control against the world number 109.

"Things got complicated. I lost my focus and he started missing less," Djokovic said.

But the Serb quickly went a break up in the third and then - helped by Dzumhur's 41 unforced errors and eight double faults - claimed victory on an Arthur Ashe Stadium that was empty because the tournament is being held behind closed doors because of the coronavirus pandemic.

Djokovic has won all 24 of his matches in 2020, which has included titles at the Australian Open, Dubai Tennis Championships and last week's Western and Southern Open.

The 23-year-old German stuttered as he lost the second set, but regained control to beat the 2017 finalist.

"Kevin is not somebody you usually play in the first round," Zverev said. "I'm extremely happy to get through."

Zverev broke serve to go 3-2 up against Anderson in the first set but was later broken back by the world number 117, claiming victory in a tie-break.

Anderson broke late in the second set to level things and pushed the German at every opportunity with his dominant serve, but Zverev eventually wrapped up the match in just over three hours.