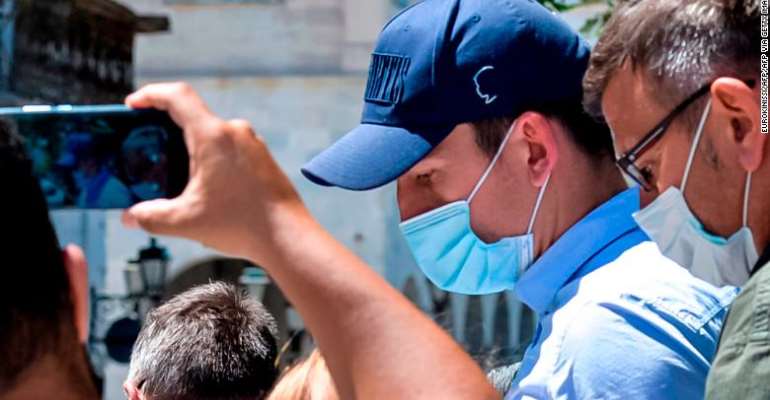 Manchester United football team captain Harry Maguire leaves a courthouse on the Greek island of Syros after being released from police custody on Saturday August 22.

The Greek prosecution lawyer at the centre of the Harry Maguire case has questioned the Manchester United football star’s version of events after he was found guilty of aggravated assault, resisting arrest and attempted bribery of police following a confrontation with the authorities on the island of Mykonos.

According to Greek police, three Britons Maguire, his brother and a friend were involved in a “brawl” with locals after a night of drinking in a bar in the early hours of Friday, August 21.

Police said officers on patrol intervened to resolve the dispute but said the three foreigners turned on them, injuring four officers, according to police and the prosecution lawyer, Ioannis Paradissis.

Manchester United’s English international defender Harry Maguire has appealed against the verdict of a Greek court which found him guilty of aggravated assault, resisting arrest and attempted bribery of police following an incident on the Aegean island of Mykonos.

All three men were arrested and spent the night in police cells before being released the following day.

Maguire’s subsequent claim in a BBC interview that he “feared for his life” in the confrontation with Greek police in what he thought was a kidnapping was described as “fiction” by Paradissis.

He also called on the Manchester United player, who is the world’s most expensive defender, to apologize.

Maguire was on vacation in Mykonos with his fiancée, family and friends at the time of the incident and his arrest.

At his trial on the neighbouring Aegean island of Syros on Tuesday, Maguire was handed a suspended prison sentence of 21 months and 10 days, according to Reuters.

Maguire wasn’t present at the hearing having been allowed to leave Mykonos along with his other two co-defendants including his brother Joe, but he has strongly protested his innocence and his legal team has lodged an appeal.

Manchester United is due to begin preparations for the 2020/2021 season on September 2 after a short break following the end of the 2019/20 season, which ended for the side with defeat in the Europa League semifinal to eventual winner Sevilla.

In his emotional interview with the BBC on Thursday, the 27-year-old Maguire was asked if he had tried to bribe the police and replied: “No, for sure.

There was no bribe involved.”But Paradissis, part of the legal team which secured the convictions of Maguire and the co-defendants, told CNN that Maguire was not telling the truth.

He said that what Maguire described in his interview as kidnapping was “being driven to the island police station by his own driver, that he and his group had employed on the island, following police instructions, who had intervened in the incident and identified themselves and who instructed the driver to take them to the police station.

“At the police station there were signs and police cars and bikes, it was impossible not to know where he was. And this is only a small example of how his story is made up,” added Paradissis.

Manchester United, which has publicly supported its captain Maguire despite the guilty verdict, said on Saturday that it didn’t have any comment to make, referring CNN to the club’s statement regarding Maguire’s appeal.

“An appeal against yesterday’s verdict was lodged this morning by Harry’s legal team,” said the United statement.

“In accordance with the Greek judicial process, the filing of an appeal extinguishes the initial court verdict and nullifies the conviction.

“The appeal has been accepted and will lead to a full retrial in a more senior court,” added the United statement.

“This means that Harry has no criminal record and is once again presumed innocent until proven guilty.

Accordingly, he is also not subject to any international travel restrictions.

“On his personal social media and in the subsequent BBC interview, the England international has continued to protest his innocence, claiming they were the victims in the incident.

“My family and friends know what happened that night. That’s the main thing. The people who are close to you, the ones who trust you. My conscience is clear.

I know exactly what happened that night,” he told the BBCBut Paradissis has poured scorn on Maguire’s claims of innocence.

“He should apologize for his behaviour -. Four police officers went home injured when they were just doing their job.

This man is a role model to many, especially the young,” he told CNN.

“At a time like this why did he not at least outright condemn violence, even if he then wanted to claim he was not involved? This is shocking behaviour from an athlete.

“There were witnesses at the police station that Maguire’s brother was telling officers ‘we can pay”.

This was all heard in the trial and Greek justice reached a decision.”A spokesperson for Greek police, Theodoros Chronopoulos, told CNN they would be making no further statements.

“Our involvement was concluded when the Greek justice system took over, according to Greek law. Greek justice reached a decision,” he said.

Paradissis also disputed Manchester United’s interpretation of the legal position of the Maguire case, saying the date for a retrial was up to two years away.

“Manchester United has said the verdict is basically invalid because of the appeal process but under Greek law, that verdict has only been suspended until the retrial in the form of the appeal takes place.

So he remains a convicted person under Greek law,” he said.”All the same, the consequences of the conviction have been stayed until the appeal.

“Maguire is also a key member of manager Gareth Southgate’s England international squad and was initially picked for September’s Nations League matches against Iceland and Denmark.

Following the verdict of the Greek court, Maguire was immediately withdrawn, with Southgate saying: “it was in the best interests of all parties.

With the postponed Euro 2020 taking place next summer and with important warm-up matches to be played in preparation, Maguire is keen to return to the squad, despite the ramifications of the guilty verdict and the ongoing legal process.

“I love playing for my country. Physically and mentally I am ready to play. I’m disappointed but of course, I understand,” he said.