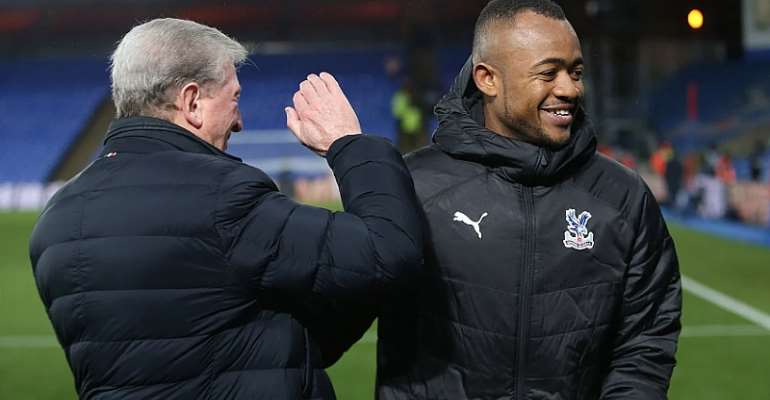 Striker Jordan Ayew has lauded his Crystal Palace manager, Roy Hodgson for helping in his development as a player.

Jordan joined teh Eagles on loan in 2018/19 season after Swansea City suffered relegation under the English manager.

The Ghana forward scored once in 20 league games. However, Palace astonishingly signed the 28 year old permanently after a stellar Africa Cup of Nations (AFCON) campaign in 2019 with the Black Stars in Egypt.

Jordan emerged as the top scorer for the club in 2019/20 season with nine goals in 37 league matches.

Jordan revealed that Hodgson improved his efficiency in front of goal.

“First of all, I would like to thank him [Roy Hodgson], the staff and the board as well. During the training sessions, even if on the weekend things weren’t going the way we all wanted, I was showing good things so I think that is what pushed them to make it permanent,” he informed the Ghanaian media.

“I fought hard and it forced him to give me the opportunity to prove myself week in week out. He has been really good to me.”

“He has brought efficiency in my game and made me understand that football is all about efficiency and of course I understood that if I have two chances, I have to make sure that at least one goes in because we are in a team where we don’t create much opportunities so we really needed to be clinical.”

The former Aston Villa ace also noted that his mentality changed right before the AFCON and it contributed to the upturn in his form.

“I think it’s my mentality that changed a lot and the manager saw it. I thank God because things went really well. I didn’t expect it but like I said its life when you work hard, you will get rewarded. I am using the same routines I used before the AFCON till now so I think it is the right direction for me and I’m sticking to that direction.”