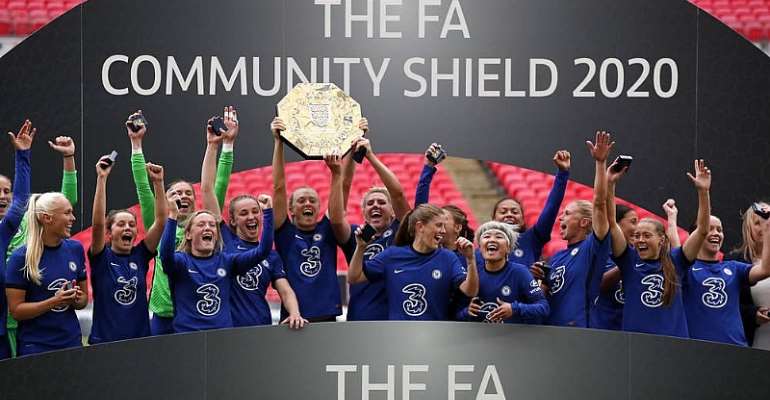 Bright's superb strike from 25 yards flew into the top-right corner after City's Jill Scott had been sent off for two bookable offences.

Scotland midfielder Cuthbert made it 2-0 in stoppage time to seal the win.

Chelsea's Sam Kerr, starting ahead of Bethany England up front, missed some big chances before Bright opened the scoring for the Women's Super League champions.

FA Cup holders Manchester City came close in the first half when Chloe Kelly struck the outside of the left post after Georgia Stanway had forced a smart save from goalkeeper Ann-Katrin Berger with a powerful effort.

But Chelsea could easily have won by more had Kerr put away one of her clear-cut opportunities.

The Australia forward, who joined Emma Hayes' side in November, hit the side-netting after three minutes when she was clean through and then poked wide from a few yards out in the second half.

It was the first women's contest held since 2008 and Chelsea, who were awarded the 2019-20 WSL title ahead of City, pick up where they left off after lifting the Continental Cup in February.

Saturday's match at Wembley was played behind closed doors amid the coronavirus pandemic.

"We need the hand of God like never before against economy d...
34 minutes ago