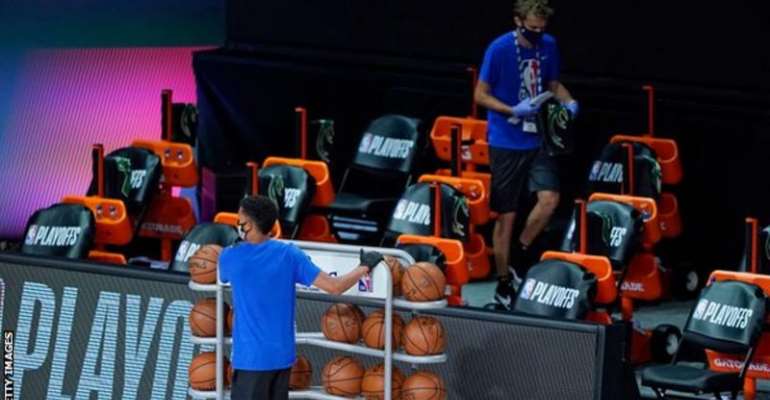 Balls and towels were removed from the Bucks' bench area

The NBA postponed Wednesday's three playoff games after the Milwaukee Bucks called off their fixture in protest at the shooting of Jacob Blake.

Blake, a black man, was shot seven times in the back by police on Sunday in Kenosha, Wisconsin near Milwaukee.

In baseball, three MLB games were called off after teams decided not to play, and five MLS matches have been postponed.

Tennis player Naomi Osaka pulled out of a WTA match on Thursday.

She tweeted that she would no longer play her semi-final in the Western and Southern Open in New York, saying that "as a black woman I feel as though there are much more important matters at hand that need immediate attention, rather than watching me play tennis".

The US Tennis Association, ATP and WTA subsequently announced it was pausing play at the Western and Southern Open on Thursday and would resume on Friday, adding that "tennis is collectively taking a stance against racial inequality and social injustice".

It is unclear whether the Japanese former world number one will now play her match against Belgian 14th seed Elise Mertens on Friday.

After calling off their game against the Orlando Magic, the Bucks players released a statement that said: "Despite the overwhelming plea for change, there has been no action, so our focus today cannot be on basketball.

"When we take the court and represent Milwaukee and Wisconsin, we are expected to play at a high level, give maximum effort and hold each other accountable.

"We hold ourselves to that standard, and in this moment, we are demanding the same from our lawmakers and law enforcement.

"We are calling for justice for Jacob Blake and demand the officers be held accountable."

The Houston Rockets' game against the Oklahoma City Thunder and the Los Angeles Lakers' match-up with the Portland Trail Blazers were also postponed and will be rescheduled.

It has been reported that NBA players in the bubble will meet at 16:00 BST to discuss how to proceed with the play-offs.

The Seattle Mariners announced they had decided not to play the second game in their MLB series against the San Diego Padres.

The decision was based on a unanimous vote from the players, Mariners player Dee Gordon tweeted.

"The players from the Brewers and Reds have decided not to play tonight's baseball game," said a statement issued by the Brewers.

"With our community and our nation in such pain, we wanted to draw as much attention to the issues that really matter, especially racial injustice and systemic oppression."

California rivals the San Francisco Giants and the Los Angeles Dodgers postponed their scheduled game and issued a joint statement that said: "Throughout our country's history, sport has been a powerful vehicle towards change.

"The Dodgers and Giants proudly join our players in the shared goal for a more equitable and just society."

Jason Heyward of the Chicago Cubs, Matt Kemp of the Colorado Rockies and both Dexter Fowler and Jack Flaherty of the St Louis Cardinals, all of whom are black or mixed race, opted out of their sides' games on Wednesday.

The WNBA postponed all three games due to take place in the bubble in Bradenton, Florida on Wednesday.

The players linked arms on court, with a group wearing T-shirts that spelled out Blake's name and also seven holes in them representing how many times he was shot by police.

"We stand in solidarity with our brothers in the NBA and we continue this conversation with our brothers and sisters across all leagues and look to take collective action," said Atlanta Dream's Elizabeth Williams in a statement on behalf of all WNBA players.

"If you truly believe that black lives matter, then go and vote."

Milwaukee Bucks' senior vice-president Alex Lasry tweeted: "Some things are bigger than basketball. The stand taken today by the players and organisation shows that we're fed up. Enough is enough."

He added: "Change needs to happen. I'm incredibly proud of our guys and we stand 100% behind our players ready to assist and bring about real change."

After the postponement, a statement on behalf of the Bucks' owners read: "We fully support our players and the decision they made. Although we did not know beforehand, we would have wholeheartedly agreed with them.

"The only way to bring about change is to shine a light on the racial injustices that are happening in front of us. Our players have done that and we will continue alongside them and demand accountability and change."

Former US President Barack Obama, a dedicated basketball fan, tweeted his support of the walkout.

Prior to the scheduled game, Bucks coach Mike Budenholzer said: "Myself, my players and our organisation are very disturbed by what happened in Kenosha.

"It is a great challenge to have an appreciation and a desire to want change, to want something different and better in Kenosha, Milwaukee and Wisconsin, and then to go out and play a game."

NBA players are scheduled for a meeting in Florida later on Wednesday to determine their next steps, with NBA TV saying that some players are contemplating leaving the NBA bubble near Orlando.

Earlier in the day, NFL's Detroit Lions cancelled their practice session. Players then gathered in front of the team facility, holding signs which read: "We Won't be Silent" and "The World Can't Go On."

After the NBA walkout, the NHL held a 'moment of reflection' before the games between the Boston Bruins and Tampa Bay Lightning in Toronto, and the Dallas Stars and Colorado Avalanche in Edmonton.