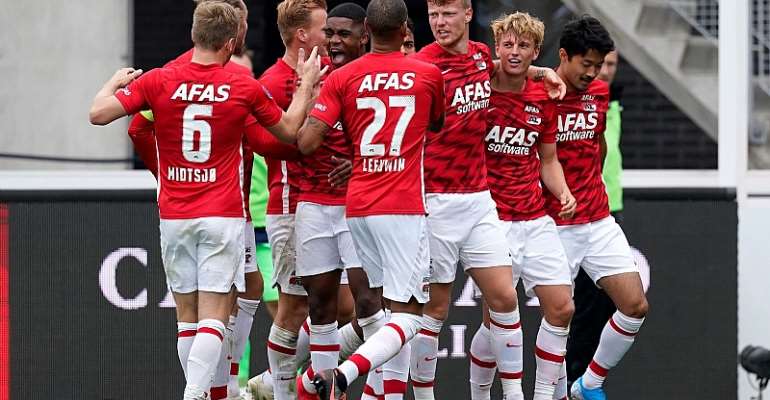 Dutch forward of Ghanaian descent, Myron Boadu displayed an impressive form for AZ Alkmaar on Wednesday evening to help the club defeat Viktoria Plzen 3-1 in the second qualifying round of the Uefa Champions League.

Ahead of the start of the next edition of the Uefa Champions League, clubs are fighting for spots in the playoffs to join the already qualified teams.

On the Matchday, Myron Boadu earned a starting role for his team and added to the attacking threat of his team in so many ways.

Following a goalless first half, Viktoria Plzen returned from the break to take the lead on the 77th minute through a strike from David Limbersky.

After staying resilient, AZ managed to draw level on the 90th minute when Teun Koopmeiners converted a penalty kick.

With the match traveling to extra time, it took a brace from Albert Gudmundsson to win the game for AZ Alkmaar. Myron Boadu assisted his attacking teammate's second goal to condemn Viktoria Plzen to the 3-1 defeat.

Having lasted the entire duration of the match, Myron Boadu earned a rating of 7.3 from SofaScore, the 4th highest by any player of the two teams combined.