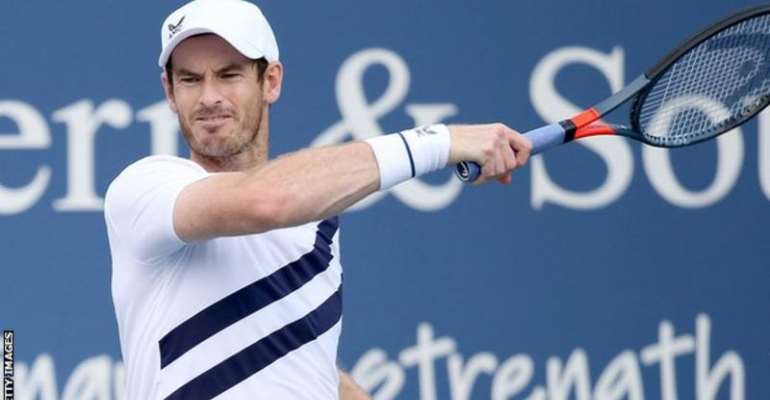 Andy Murray's run at the Western and Southern Open came to an end after he was outpowered by Canada's Milos Raonic in a last-16 defeat in New York.

Murray, 33, could not replicate the same level he showed in beating fifth seed Alexander Zverev, going down 6-2 6-2 to world number 30 Raonic.

The loss means Johanna Konta is the only Briton left in the singles.

British number one Konta, 29, produced another powerful performance to win 6-4 6-2 against Russian qualifier Zvonareva, who is ranked 270th.

The Western and Southern Open is usually held in Cincinnati but was moved to Flushing Meadows to create a two-tournament safety bubble that also incorporates the US Open, which starts on Monday.

Despite being far from his best against the big-serving Raonic, Murray should reflect on a positive week in his first top-level tournament since November.

Murray struggled with pelvic and shin injuries while the tour was suspended because of the coronavirus pandemic and said he had "zero" expectations going into the New York doubleheader.

Yet, he showed glimpses of the ability and competitive spirit which landed him three Grand Slam titles before his career was derailed by a serious hip injury that needed two major surgeries.

The victory over Germany's world number seven Zverev, particularly, was a major statement from 134th-ranked Murray.

Former world number three Raonic - who Murray beat in the 2016 Wimbledon final - proved too strong as he won in one hour and 29 minutes.

The Canadian, who beat British number one Dan Evans in the previous round, hit 21 winners compared to seven from Murray's racquet and landed 10 aces as he averaged a first-serve speed of 137mph.

"I don't know how much of it was due to the conditions at the beginning or if I was just a little bit slow. I don't know," said Murray.

"But I was really not happy with that at all. I have much higher standards than that. Not good enough tonight."

World number one Novak Djokovic showed no signs of the neck injury which has bothered him this week as he confidently beat American Tennys Sandgren 6-2 6-4.

The 33-year-old Serb has now won all 20 of his tour-level matches in 2020 and will play Germany's Jan-Lennard Struff in the last eight.

Konta has been managing a long-standing knee problem this year, and suffered heart palpitations in a defeat at the Lexington Open earlier this month, but has encountered no difficulties so far in New York.

Sakkari will represent a step up in class of opponent for the Briton, although Konta should not fear the Greek 13th seed on this evidence.

She hit confidently and cleanly against 35-year-old Zvonareva, a two-time Grand Slam finalist who is trying to climb back up the rankings after taking time off tour to give birth in 2016.

The Russian's serve was broken three times, while Konta's own serve rarely came under threat.

Konta, ranked 15th in the world, reached the US Open quarter-finals last year

"She is very tricky to play, she has been around a long time. I served well and I was building the points well where I could," said Konta, who is working with new coach Thomas Hogstedt in the United States.

Hogstedt, a 56-year-old Swede who helped Maria Sharapova win the 2012 French Open, has taken over from Frenchman Dimitri Zavialoff.

"It is still very early days, this is the third week I have spent with him," said Konta, who is hoping the appointment can help her make the leap from three-time Grand Slam semi-finalist to major champion.

"We are still trying to figure out on how we work together. I'm listening intently to him on kind of his view on things, on court for me and just in general."

In the men's doubles, Jamie Murray and Neal Skupski reached the quarter-finals with a 6-3 4-6 10-5 win against Serbian pair Nikola Cacic and Dusan Lajovic.