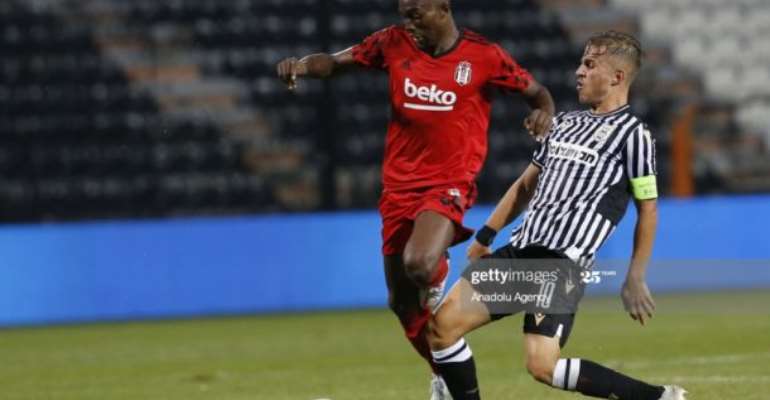 Ghana midfielder Bernard Mensah marked his debut for Besiktas on Tuesday night when the club lost 3-1 to PAOK in the second qualifying round of the Uefa Champions League.

The former Atletico Madrid man joined the Turkish giants on loan from Kayserispor last week on the back of an outstanding season in the Super Lig.

In a Uefa Champions League qualifying game at the Toumba Stadium today, Bernard Mensah earned a starting role for Besiktas to help the team look for victory.

Though the midfielder displayed glimpses of his quality, a below-par performance from his team resulted in a defeat at the end of the 90 minutes.

A brace from Christos Tzolis plus a strike from Dimitrios Pelkas handed PAOK 3 goals as an equalizer from Cyle Larin served as a consolation goal for the losers.

Ghana’s Bernard Mensah lasted 69 minutes of the Uefa Champions League qualifying match before he was replaced by Dorukhan Tokoz.

He will now together with his team drop into the Uefa Europa League qualification playoffs.