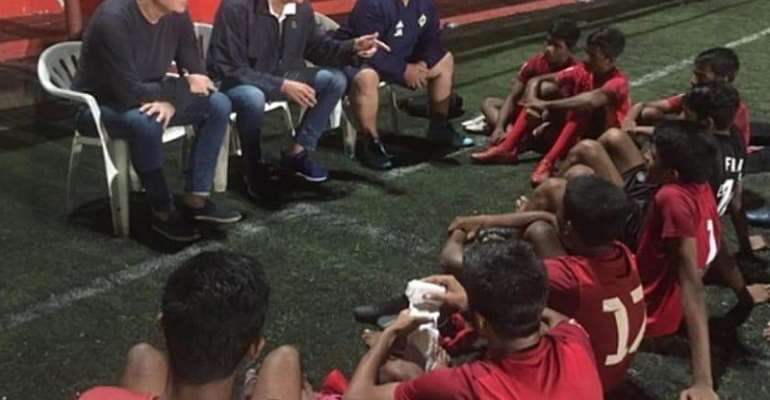 Technical Director for Maldives Football Association (FAM) Judan Ali has revealed he is still at post refuting claims he has been sacked by the football association after his offers to take a pay cut were rejected.

In an exclusive interview with Nhyira FM, the former England footballer says his windows are open to working for any association or entity that asks for his services despite serving as the Maldives Football Association’s Technical Director currently.

"Yes, I am at this present moment in time still the Technical Director of the Football Association of Maldives. I had discussions over the past few months with the President of the Football Association of the Maldives regarding taking a pay cut, and my offers to take a pay cut were rejected on numerous occasions, despite it is public knowledge that FIFA and the AFC fund the majority of my salary, I am confused as to why I was asked to take a huge pay cut, especially as the borders re-opened to tourism last month in the Maldives. For me making a 10-year commitment wasn't done lightly as there are many financial commitments that I had to do in order to make my move to the Maldives affordable, such as relocating and organising my property and personal commitments back in the UK and I am also providing the English NHS with housing for the Nightingale Project so I am totally in favour of taking a pay cut within justified means,” said Ali.

“Even my legal representative stepped in to offer alternatives to which were of no avail as stated emphasizing FAM has no justifiable reason in seeking to reduce our Client’s salary in circumstances where it has received funding, precisely for the purpose of paying our Client. The AFC President’s Technical Staff Initiative shows that the AFC had committed $100,000 annually as a contribution to the Technical Director role. This was a fund set up by the AFC to “to support AFC Financial Assistance Programme Beneficiary Member Associations with hiring qualified technical expertise in the key areas of technical development”. FAM is a beneficiary Member Association and would therefore have received funding to cover 91.74% of our Client’s salary. FAM also informed FIFA on 14 April 2020 in a questionnaire it was asked to complete that there had been no change to the remuneration of its staff caused by Covid-19. Also, FIFA has deposited the $500,000 Covid Relief which is also public knowledge on the FIFA website where each member Association is entitled to receive a solidarity Grant in an aggregate amount of USD 1,000,000 (the Solidarity Grant), payable in two instalments of USD 500,000 each as follows: i) a first instalment of USD 500,000 (the Solidarity Grant Tranche 1) as of July 2020, and ii) a second instalment of USD 500,000 (the Solidarity Grant Tranche 2) as of January 2021,” the former Indonesia National Army Football Team coach stated.

Judan Ali expressed sadness at the extinction of the relationship and chemistry built with the Maldives National Youth teams especially the U16 boys where he assumed the head coach role which was vacant should he walkout.

“Apart from leaving the role of Technical Director, I shall miss the bond that I developed with the U16 National Men's team as they were without a coach. Sadly there is always one loser in such situations and that is the development of players and the kids. It is with regret and I am saddened that I shall be leaving the Maldives FA upon the President of the Football Association of Maldives who is Bassam Adeel Jaleel forcing me to part ways which are a clear breach of my contract and the matter now is in the hands of FIFA.”

Judan Ali has been linked to the Ghana Football Association’s vacant Technical Director Position. Investigations by Nhyira Power Sports revealed he was introduced to the GFA by former Ghanaian born Dutch international George Boateng who currently works with the Academy side of Premier League outfit Aston Villa in England.

“As I understand, my good friend George Boateng (Premier League Coach of Aston Villa FC) recommended me to the Ghana FA. I also have a few other offers from European Clubs and other establishments which I shall consider, however, who knows what the future holds, I would relish the opportunity to develop and to take Ghana football where it deserves to be and based on the current playing personnel, who have the potential to lift a World Cup, and that's not just the men's but also the women's and the National Youth teams who did it back in 1991 & 1995,” Ali confirmed.

Even though Judan Ali has been introduced and linked by his close friend Boateng to the GFA, he is not obsessed about picking up a new role in earnest.

“I shall not be rushing into my next position and I have a lot of things to consider, football for me is a learning process and I want to do what is best not only for my next employer but also for myself,” Ali concluded.