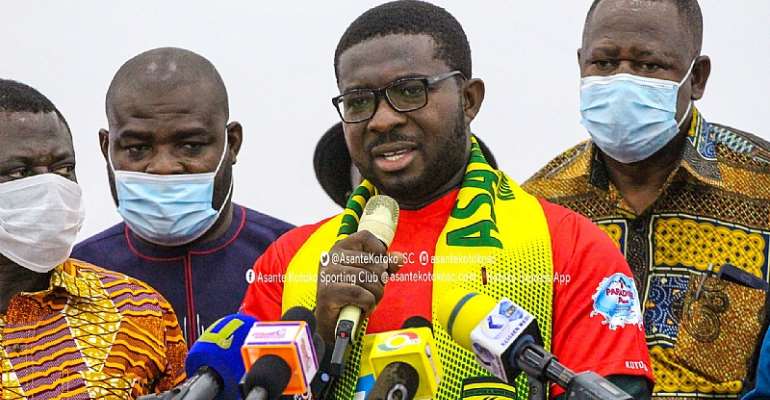 The spokesman of the Board of Directors of Asante Kotoko, Mr Kwadwo Boateng Genfi, has unravelled the untold story of how Nana Yaw Amponsah blew away the 12-member board to become the new Chief Executive Officer of the club, in an emotional encounter.

In an exclusive interview with Graphic Sports, Mr Genfi narrated how the young CEO mesmerised the high-powered board with his charisma and ideas which threw their interview plan overboard during their fourth meeting in Accra.

The affable Chairman of Exim Bank Ghana disclosed that the new Kotoko CEO made the board's job quite easy with an impressive presentation which won the hearts of all the members.

"We fell in love with him at the interview. He was seriously and highly impressive.

"Even the presentation he did during the interview was such that we decided not to bother ourselves to call any more people for interviews in order not to waste our time and that of those individuals," Mr Genfi explained.

According to him though the board had its own objectives, the members unanimously ended up unanimously endorsing Nana Yaw Amponsah after his spell-binding presentation.

"We felt that he was the one we were looking for. It was unanimous -- 12-0; everyone on the board voted for him.

"It was only the voting for the timing of the announcement of the new CEO that was 11-1 because one person voted against it," he noted.

Mr Genfi stated that the board had so much confidence in the new CEO and had given him seed money to fund the activities of the club in the interim.

"So far I will say that we have contributed a lot to the club's kitty to propel the Chief Executive to action," he further revealed.

He reiterated the commitment on the part of the members to make Kotoko great again through their expertise and financial contributions.

"Another example is when we needed to buy Land Cruisers for the new CEO and the coach, Dr Kofi Annan said I'm ready to do this; so he didn't wait for us to contribute.

"There is a lot that the others are doing on the quiet. Everybody is playing his role; the chairman, Dr Kyei, and all of us," Mr Genfi added.