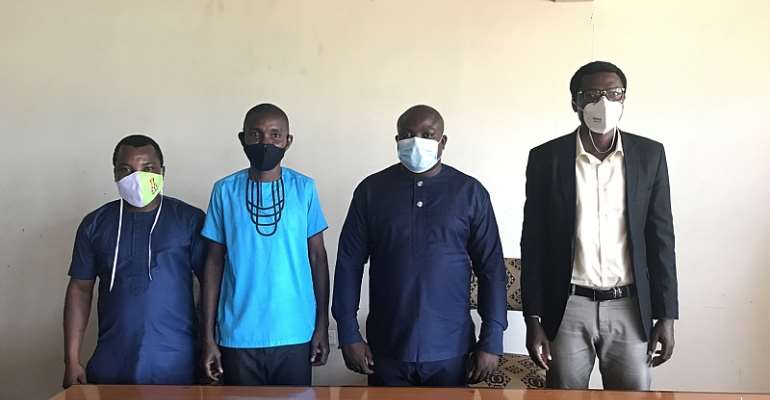 The meeting discussed ways to develop and strengthen football in the various districts.

Mr. Agboga who was accompanied by the Regional FA Secretary, Promise Ahiagba said the development of football is a collective effort from all stakeholders hence the meetings.

”This program of developing football in our region is a collective fight,” Mr. Agbogah said

”We need collective attention to channel it” he added.

He also touched on Youth skills development from the grassroots through sports.

"If we engage the youth in football, it prevents them from making negative choices. Because they are engaged it prevents and minimizes social vices, your involvement is important, a stakeholder who will play that significant role in the Journey," he said.

The District Chief Executive of Akatsi South, Leo-Nelson Adzidogah, who first received the delegation of football administrators admits that sports (football) can contribute to social development when the right people are in place.

”In developing sports we look for a lot of things that must come into play, the technical skills, and talent that will impact in sports development,” Mr. Adzidogah said.

He added that the sports industry can only survive strongly when stakeholders play vital roles in the development of sports through infrastructures.

”It is time we play a frontline role in the development of sports if we don't do that the industry will collapse,”

”When you have the infrastructure and the resources you will motivate people to develop,” he said.

The Regional FA then met the Ketu South Municipal Chief Executive, Elliot Edem Agbenorwu, who reiterated the need for sports development and described it as a shared responsibility for all.

”Development is a shared responsibility, for you to develop sports, you cannot sit as a chairman and say you have the repository knowledge and say you won't engage anybody, it is good you are having this engagement with us,” Mr. Agbenorwu stated.

This is the fourth and fifth district the regional FA has engaged so far.

It will continue to engage administrative leadership of the various districts to introduce all nine District Football Association’s and it's executives under the regional FA.

The next districts to be visited will be the Kpando, Nkwanta districts respectively.