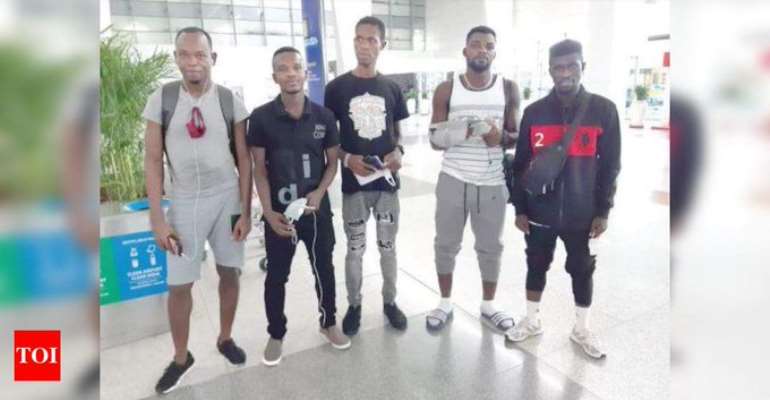 Some Ghanaian players who were left stranded in India are back home safely with the aid of an Indian.

Over 30 Ghanaian footballers were left stranded on the street of India after their contract were terminated following the outbreak of the novel coronavirus but five players have safely arrived home.

The players in a video last month appealed to the government and President Akufo-Addo to come to their aid by repatriating them.

Players were left to sleep in church buildings with some nowhere to sleep.

However, an intervention from a non-resident of India, Anirudh K, who told Times Of India, he had read about the plight of the Ghanaians and decided to help.

Anirudh raised an amount of $6,800 consisting mostly his own money as well as contributions from friends to ensure that these footballers were able to board the Chartered evacuation flight from New Delhi to Accra on Friday.

Richard Hanson who was stranded in Dimapur, a city in Nagaland, Stephen Kwasi Mensa who been bed-ridden with a critical liver condition for the past five months and three others were all on board the flight.

Sources from the Times of India indicated that Jaya Bakery team manager Rafeeq P B arranged for domestic flight tickets for Mensa from Kerala to New Delhi, while Anirudh’s group helped with all other expenses, including six months of medication for the critically ill defender.