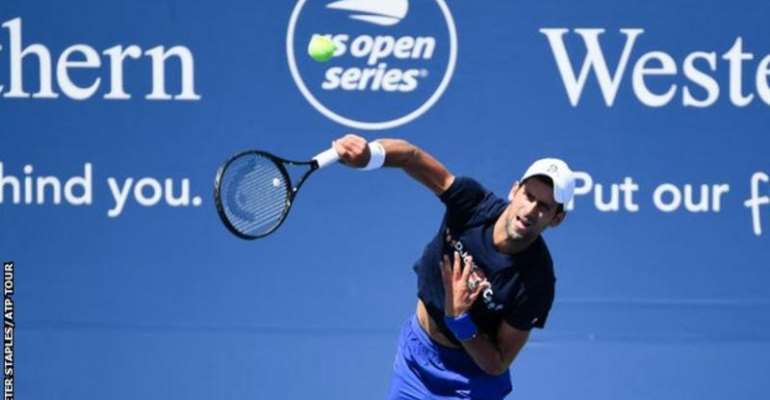 Djokovic is already practising in New York for the Cincinnati Masters, which takes place at Flushing Meadows before the US Open

Serbia's world number one Novak Djokovic says one of the reasons he decided to play the US Open was to help the sport "keep going".

Djokovic, 33, is in New York preparing for the Grand Slam event which takes place from 31 August in New York.

A number of players, including reigning champions Rafael Nadal and Bianca Andreescu, have pulled out because of health and travel fears.

"I felt responsible as a top player to be here," he told the New York Times.

"It's important for our sport to keep going."
Spain's Nadal ranked second in the world, withdrew earlier this month because he felt the coronavirus pandemic was "not under control".

Canada's Andreescu, 20, is one of six players inside the women's top 10 - including Australian world number one Ash Barty and Wimbledon champion Simona Halep of Romania - who have decided not to play.

The absence of 19-time Grand Slam champion Nadal, along with 20-time winner Roger Federer with a knee injury, presents Djokovic with a golden opportunity to close the gap on his great rivals by winning another major.

"I cannot say it's the main reason why I'm here, but it's one of the reasons," said Djokovic, whose Australian Open triumph in February was his 17th Grand Slam title.

In the same interview, Djokovic said he felt the criticism over his ill-fated Adria Tour event became a "witch hunt" and insisted he is not against all vaccinations after previously being accused of being an anti-vaxxer.