Jose Clayton: The Brazilian Footballer Who Is More At Home In Tunisia 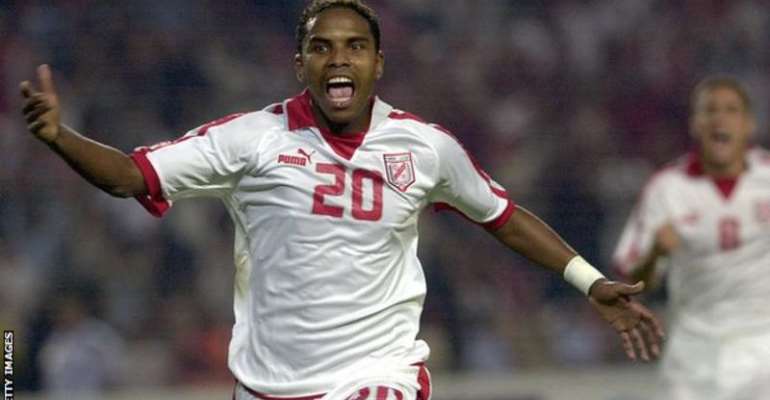 He was born in Sao Luis a city on the coast of northern Brazil on 21 March 1974 and lived there for 20 years when he ended up in Tunisia.

Clayton started his football career at his hometown club in Brazil before making his way to play for Etoile du Sahel.

The move not only launched Clayton's career but it also provided him with a gateway to play international football for Tunisia.

If you think that he returned home to Brazil on his retirement you would be wrong!

"People in Brazil who are close to me know that I want to spend the rest of my life in Tunisia," he told BBC Sport Africa.

"The good thing is that everyone was very understanding and that I was happy doing what I love with people that I love, participating in great competitions."

Clayton is now engaged to a Tunisian woman, speaks French fluently and does his very best with his Arabic too.

"C'est l'amour - I stayed for love. I stayed for the love of a country that took me in as one of their own. I spend most of my time here in Tunisia and I enjoy every moment of it." he continued.

"I have no regrets or whatsoever, it's quite the opposite, I'm proud to have Tunisian nationality and to call myself Tunisian."

His love affair with Tunisia seems to have begun almost immediately.

"I felt very good and very welcome in Etoile, it soon felt like home to me," Clayton added.

Then in early 1998, in the days before Fifa changed its eligibility regulations, Clayton became the first foreign player in Tunisian history to be given citizenship to represent the national team.

The offer meant that Clayton was eligible to play for the Carthage Eagles at the World Cup in France that year.

"I didn't even hesitate when I received the offer to get Tunisian nationality and play for the national team," Clayton added.

"I was in a country that welcomed me with open arms and that I love immensely. I would go as far as to say that I felt more at home in Tunisia than I did in Brazil."

The decision to accept citizenship and the chance to play for the Carthage Eagles was a 'no-brainer' according to Clayton.

"This might seem odd to some people but it's the truth," Clayton admitted.

"I received a call from the coach asking me if I was interested in the idea. It was a no brainer to me.

"I was made very welcome by the team. Despite the rivalry between our clubs, it was a different story with the national team, right from day one when I arrived at camp in 1998.

"Many people thought that I was just taking the opportunity to play in the 1998 World Cup, but it was more than that for me.

"I was determined to stay and represent Tunisia for as many years as I could."

Clayton went on to play for Tunisia at the World Cup four years later and won the 2004 Africa Cup of Nations on home soil.

He ended his international career in 2006 after earning 39 caps and scoring 4 goals.

At club level Clayton played in France, Qatar and Turkey and three other Tunisian sides apart from Etoile, with two seasons at Stade Tunisien, a further four with Esperance before ending his career in 2008 after two years at Stade Gabesien.

Clayton is still often seen at Tunisia's international games supporting the team he won the Africa Cup of Nations with on home soil in 2004.

"That was the best moment of my career. We weren't just playing for a Jersey or a team, we were defending an entire nation. It was extraordinary," he remembered.

"We were very close friends with a wonderful coach (Frenchman Roger Lemerre), I can't do him justice with words.

"He's an exceptional man who knew how to manage the team. We were like a family and the atmosphere was spectacular.

Tunisia beat Morocco in the final game 2-1 with Clayton helping create the chance for Ziad Jaziri to score the winning goal.

The Carthage Eagles other goal that day was scored by another Brazilian import, Francileudo dos Santos

"The Afcon final was a game we needed to win. Our team was good, we were playing at home and were confident that we could win the cup." Clayton said.

"We played a great game and earned our victory. I took my shot during the first half but the goalkeeper managed to stop it.

"With my second effort in the second half, I was lucky that the keeper let the ball go and Ziad Jaziri was there for the rebound.

"It was an unforgettable moment. It's moments like that stick with you for the rest of your life."