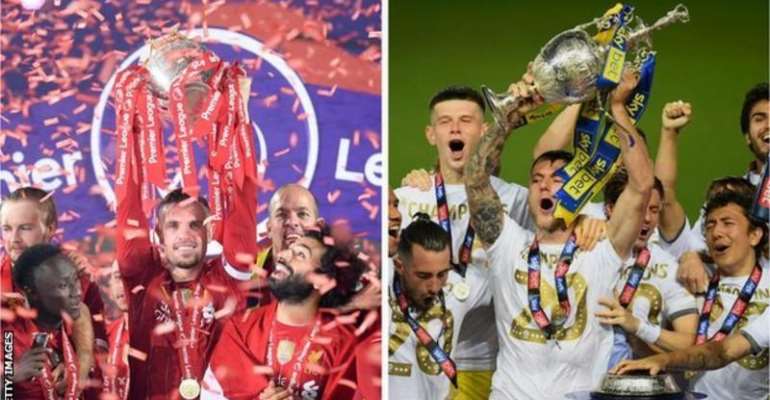 Championship play-off winners Fulham will host Arsenal, while West Bromwich Albion, the third promoted side, are at home to Leicester City.

The opening round of fixtures will take place on the weekend of 12 September.

Those two games will not be played on the opening weekend to give City and United 30 days since their defeats in the quarter-finals of the Champions League and the semi-finals of the Europa League respectively.

Chelsea and Wolverhampton Wanderers' opening matches are both scheduled for Monday, 14 September after their slightly earlier European exits.

The Blues are at Brighton, while Wolves go to Sheffield United.

Exact dates and kick-off times will be confirmed when the television selections are made. Matches will be played behind closed doors amid the coronavirus pandemic.

The English Football League fixtures are expected to be announced on Friday.

There can be little doubt over the glamour fixture of the opening weekend as the champions of the top two divisions go head to head.

Leeds, now under iconic Argentine boss Marcelo Bielsa, are back in the Premier League after 16 years away and have the toughest possible start.

Liverpool - English champions for the first time for 30 years - have not lost a home game in the Premier League since a 3-1 defeat by Crystal Palace in April 2017. Jurgen Klopp's side have won 25 of their past 26 league matches at Anfield.

The Reds travel to Chelsea for their second game, before a home match against FA Cup winners Arsenal. Leeds host fellow promoted side Fulham in their second fixture.

The first big derby of the season will be on Merseyside when Everton v Liverpool takes place on 17 October.

Manchester United host Leeds in a renewal of their old rivalry on 19 December, with the return game at Elland Road on 24 April.

Manchester City, who finished second last season, face title rivals Liverpool at Etihad Stadium on 7 November, with their other game on 6 February.

All dates subject to change

With the season starting a month later than usual because of the Covid-19 pandemic, the games will come thick and fast.

The upcoming campaign will be five weeks shorter than a standard season because of the late end to 2019-20 - and the winter break has been scrapped.

Arsenal and Liverpool meet in the Community Shield on 29 August, with players then going on an international break for the Nations League before the Premier League starts.

Manchester City v Aston Villa could be played on 15 September, with Burnley v Manchester United the following day - although that is yet to be confirmed.

Those are the dates Premier League clubs not in Europe enter the Carabao Cup at the second round.

Spurs start Europa League qualifying on 17 September and could end up with two first-team matches in the same midweek.

There are rounds of Premier League games due on 26 December, 28 December and 2 January over the festive period.

The final league fixtures will be on 23 May 2021 - eight days after the FA Cup final.

The Champions League final is on 29 May, with the delayed Euro 2020 starting on 11 June.