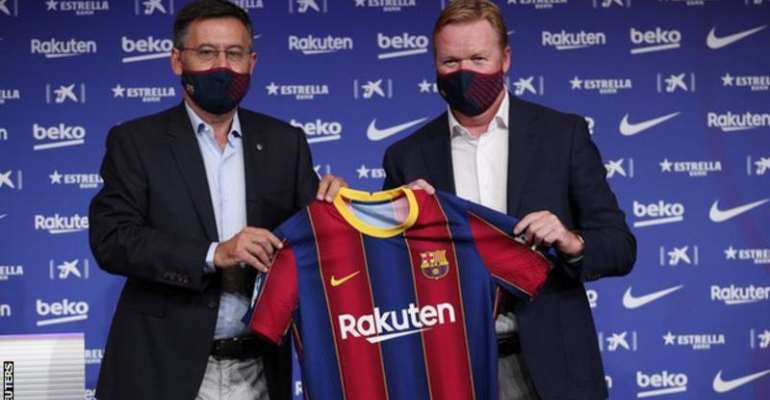 New Barcelona head coach Ronald Koeman says he does not know if he will have to "convince" Lionel Messi to stay at the club.

Koeman, 57, has signed a two-year deal with Barca, two days after the club sacked Quique Setien.

Messi's future at the Nou Camp is uncertain after they failed to win a trophy last season for the first time since 2007-08.

"He's still got a contract and is still a Barcelona player," said Koeman.

"At this point I need to speak to him because he is the captain.

"We need to work with him and speak with various players. We need to make some decisions but in Messi's case I hope he stays with us.

"As a coach, I would love to work with Messi because he wins matches. If he's at the ability and level he has always shown I'd be more than happy for him to stay."

Koeman has left his role as Netherlands boss, with two years left on his contract, to take over at Barca.

He played for the Spanish giants between 1989 and 1995, helping them to four league titles and the European Cup.

The Catalans finished second in La Liga last season. The five-point gap to champions Real Madrid and the humiliating 8-2 defeat by Bayern Munich in their Champions League quarter-final last week culminated in the dismissal of Setien on Monday.

The club also announced Ramon Planes as the new technical director. He was the assistant to Eric Abidal, who left his role as sporting director on Tuesday.

"What we need to do is give a different image to what we gave against Bayern, that's not the Barca we or the fans want to see," said Koeman.

"You have to be very happy to wear the Barca shirt. You have to show that with commitment, professionalism, with everything you have inside. If we do that, the image will be totally different to what it was last week."

He added: "We're going to work very hard to build a strong team but we'll have to make changes because the image of the other day is not what we want. We'll have to work hard to recover our prestige.

"It's a big challenge and it won't be easy because Barca always demands the best of you, which is the way it should be.

"Barca are still the biggest club in the world. Now we have to work hard to make sure Barca get back to where they should be. There is enough quality in the team to demand the best results and to win trophies."