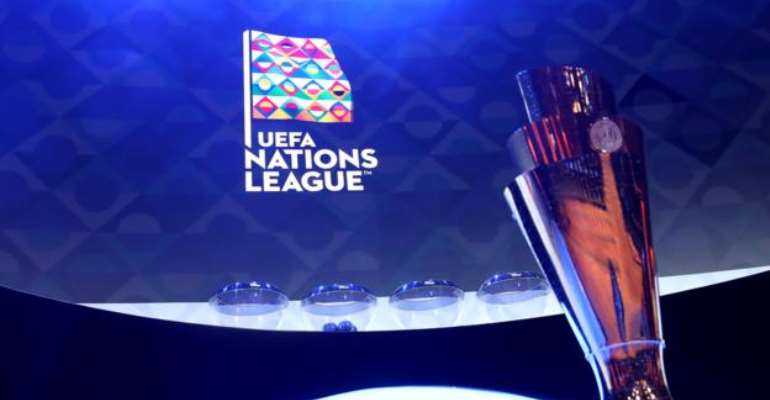 Portugal won the first Nations League, beating the Netherlands 1-0 in the final in June 2019

Uefa has decided no fans will be able to attend Nations League matches in September, despite some member countries being "comfortable" about welcoming crowds back and having Government support.

But the Uefa Super Cup in Budapest, Hungary on 24 September between the Champions League and Europa League winners could be a pilot match, with a reduced numbers of fans allowed in.

The Football Association said its "goal" is to get "some level of crowds" at England's internationals in October.

A meeting of all 55 Uefa member associations on Wednesday decided the two rounds of the Nations League next month would be held behind closed doors.

In the second staging of the Nations League, England begin with away games against Iceland and Denmark on 5 and 8 September respectively.

Gareth Southgate's side are then scheduled to play three times in a week at Wembley - a friendly against Wales on 8 October and then Nations League matches with Belgium on 11 October and Denmark three days later.

The FA's chief executive Mark Bullingham said there had been "quite a lot of discussion" about the potential for crowds to return but Uefa felt there should be a "consistent approach" for the first international window since lockdown.

Speaking after the meeting, Bullingham said: "It's a shame fans won't be able to attend matches in person but we have great broadcast partners who will bring the games to them.

"We hope by our three home games in October there will be some change to that.

"We would like to get fans into Wembley again - to what level we've got to work out with Uefa and the Government. We're not talking about full stadia but having some level of crowds back in October."

He added that the FA would be supportive if crowds were allowed back into some venues, but not all, for the international window in October.

"It wouldn't concern me," added Bullingham. "Our priority is to get fans back. We'd like to see fans coming back even if it can't happen in every country."