Checkout The Top Nine Richest Football Clubs In The World 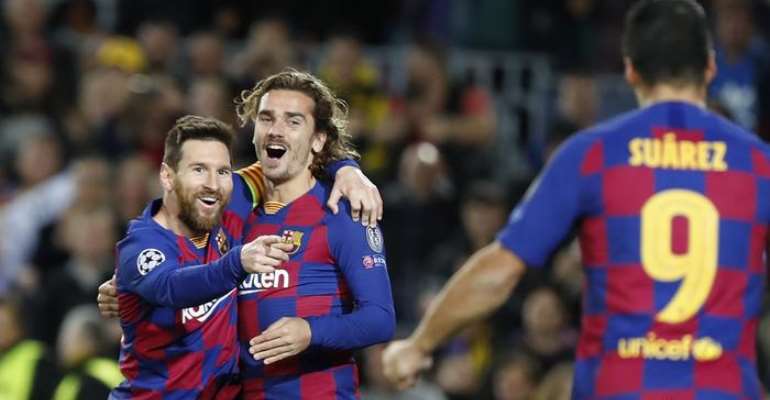 With money now ruling the football world, Modernghana.com Sports desk bring you the top nine richest clubs on the planet.

The Catalans top the Money League for the very first time and are the first football club ever to generate an annual revenue of more than €800 million. Barca have increased their revenue by more than €150m compared to 2019 after bringing merchandizing and licensing activities in-house. The club's biggest asset remains Lionel Messi. The Argentinian superstar is not for sale.

Barcelona's archrivals Real Madrid have dropped to second place after a year of mixed results on the pitch. The 13-times European champions increased their revenue by only 0.99 percent from last year (€750.9m) but that could change again in 2020. The club from the Spanish capital are after the signatures of big names such as Paul Pogba and Kylian Mbappé to usher in a new Galacticos era.

Two years ago, the Red Devils topped the Deloitte ranking but now Manchester United are back down to third, just as in 2019. The 20-times English champions increased their revenue by almost 50 million euros this year but, with on-pitch struggles again leaving Champions League qualification in do.

New Bayern president Herbert Hainer (left) has inherited a healthy club from Uli Hoeness (right). The Bavarian giants increased their revenue by €31m this year, but an extended deal with automobile partner and 8.33% shareholder Audi is reported to be worth a further €50m a year until 2029. Despite earning less TV money than English or Spanish clubs, Bayern held on to fourth place in the ranking.

For the past eight years, the French club have been financed by the Qatari state investment group QSI. The Qataris have pumped hundreds of millions into the club in order to sign top players like Neymar and hire quality coaches such as Thomas Tuchel, formerly of Borussia Dortmund. The club's main goal has been to lift the Champions League trophy but money hasn't proven to be enough so far.

Another club bankrolled by a Gulf state and which dreams of winning the Champions League, Manchester City have been owned by the Abu Dhabi United Group since 2008, changing the fortunes of a club which spent decades in their red neighbor's shadow. Since the takeover, City have won the Premier League four times and in 2016 they hired coach Pep Guardiola with Champions League success in mind.

But where Man City have so far failed, Liverpool have succeeded. The Reds won a sixth Champions League / European Cup in 2019 under German coach Jürgen Klopp, but it's been 30 years since they were last crowned English champions. This season, that dream is closer than ever, and lifting the Premier League trophy should translate into more revenue for the Merseyside club in 2020.

Italian record champions Juventus moved back into the top 10 with Deloitte claiming that the arrival of Portuguese superstar Cristiano Ronaldo "increased Juventus' commercial appeal". The 34-year-old joined Juventus from Real Madrid for more than €100 million in July 2018. other signings such as Matthijs de Ligt also boosted Juventus' brand visibility and commercial revenue.