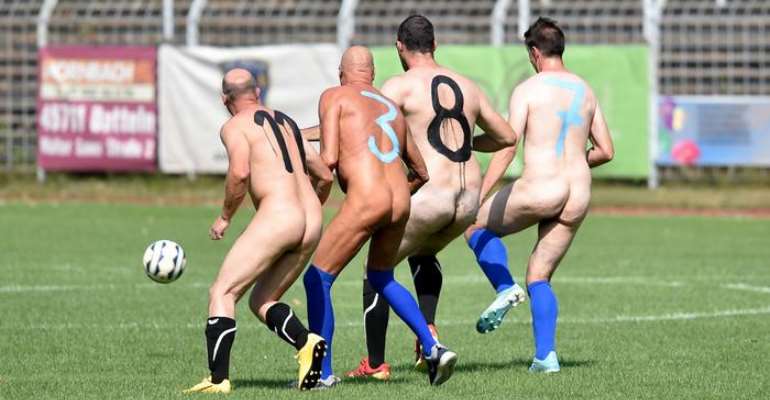 In an act of protest against the commercialization of their sport, two teams played a football game completely naked. The organizer said he sought to convey authenticity, something he says football lacks.

Two football teams in the town of Oer-Erkenschwick in North Rhine-Westphalia played a game on Sunday completely naked, as part of a protest against money in football.

The game was organized by the artist Gerrit Starczewski at the Stimberg Stadium on the northern edge of Germany's industrial Ruhr area.

"The football system is sick, that's why we all get naked," the 34-year-old artist said.

"Everybody wants to have authenticity. But I think you are only particularly authentic if you do without all the other stuff, really everything, from the advertising banners to the clothing," Starczewski told sports magazine 11Freunde ahead of the match.

The players only wore football shoes and socks, with the sock colours separated by team in order to differentiate who played for whom. Players' numbers were hand-painted on their backs.

Starczewski's critique hit at the heart of what many see as a growing problem: the growing commercialization of world football. It also comes weeks after Swiss prosecutors have launched a criminal probe against the head of football's governing body (FIFA) for alleged "rampant, systemic, deep-rooted" corruption.

But the artist also wanted to take a jab at the superficiality of the sport. "With my nude actions, I also want to set an example for diversity and naturalness and against the dependence and influence of social media and false ideals of beauty," Starczewski said.

Body authenticity is something that is absent in modern football and that is reflected in how the sport sells a certain kind of body image. "Everything has to be perfect there too, and in the end, it's all about commercialization," Starczewski added.