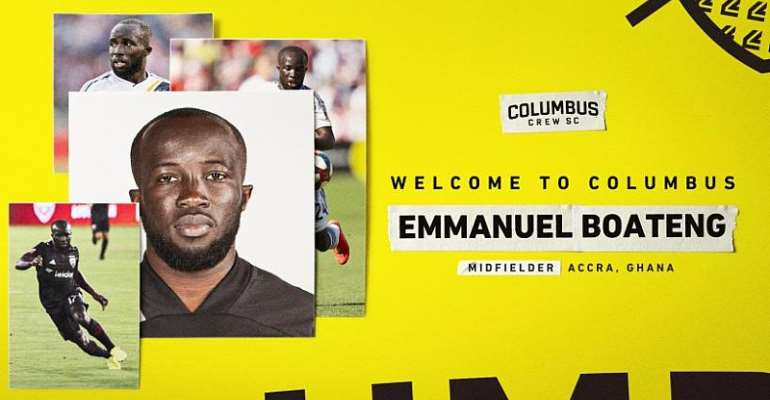 The President of Columbus Crew SC, Tim Bezbatchenko says the club is delighted with the signing of Ghanaian attacker Emmanuel Boateng.

The former Right to Dream Academy forward moved to the USA from Swedish top-flight club Helsingborgs IF in 2016 to join MLS outfit LA Galaxy.

After spending 3 years with the club and subsequently moving on to play for D.C United, Emmanuel Boateng has this weekend sealed a transfer to Columbus Crew SC.

“Columbus Crew SC today announced that the club has acquired Ghanaian midfielder Emmanuel Boateng (pronounced: BOA-tang) via a trade with D.C. United in exchange for defender Axel Sjoberg”, a statement from the MLS giants said on their official website yesterday.

The left-footed winger has been signed with a lot of expectations and will be playing a key role for Crew in the 2020 MLS campaign.

Speaking on the signing of the Ghanaian, Tim Bezbatchenko has stressed that Emmanuel Boateng gives Columbus Crew a squad boost.

“Emmanuel is a veteran, dynamic player who brings eight years of professional experience to our Club, and we are excited to welcome him to Columbus”, the President of the club who doubles as the General Manager noted.

He continued, We believe Emmanuel’s speed on the flank and his familiarity with MLS makes him a valuable addition to our roster. We also want to thank Axel for his time with Crew SC, and we wish him the best in the next chapter of his career.”