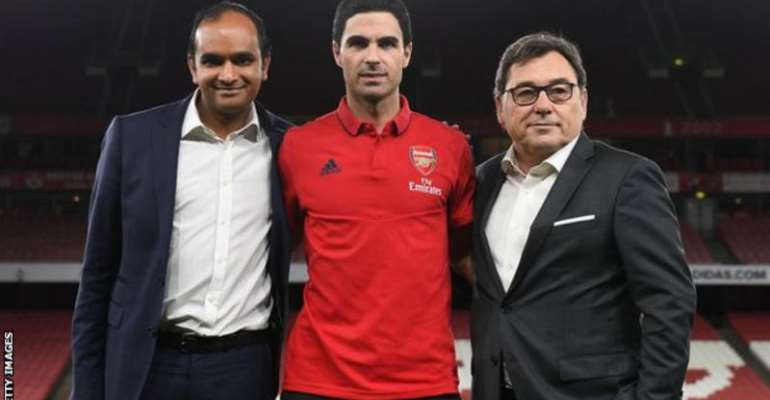 Raul Sanllehi (right) with Arsenal head coach Mikel Arteta and Vinai Venkatesham, who will be replacing him

Arsenal head of football Raul Sanllehi is leaving the club and his role will be taken over by managing director Vinai Venkatesham.

Sanllehi, 53, arrived at Emirates Stadium from Barcelona in February 2018, while Venkatesham has been at Arsenal since 2010.

"Working with Vinai, we have built a top team for the future," Sanllehi said.

"I'm proud and pleased with my contribution over the past three years.

"Arsenal is a true footballing institution."
Arsenal finished eighth in the Premier League following a disappointing campaign and now owners Stan and Josh Kroenke say they have "no doubt" Venkatesham is the person to "take the club forward".

The club sacked Unai Emery in November 2019 after a poor run of form before appointing former captain Mikel Arteta as head coach the following month.

However, they ended the season strongly, winning the FA Cup for a 14th time in July by beating Chelsea 2-1 at Wembley.

Venkatesham says he is thankful for the trust owners Stan and Josh Kroenke have put in him and that he is looking forward to a new challenge.

"There is much work to do to return Arsenal to the top of the game where we belong, which is what our fans rightly demand," Venkatesham added.

The Gunners have already secured their first summer signing, bringing in Brazilian winger Willian, 32, from Chelsea on a free transfer.