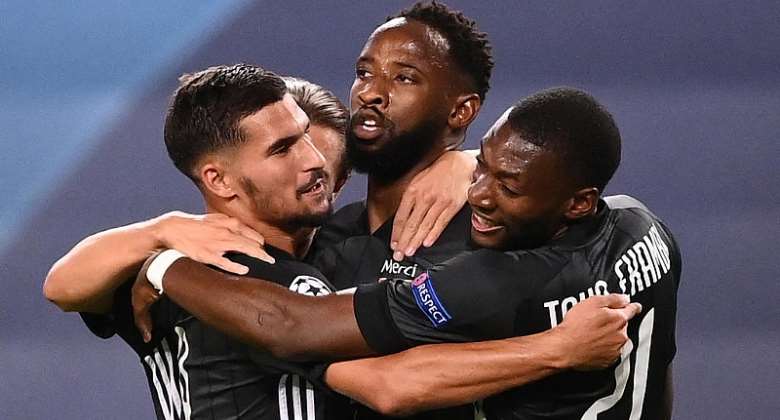 Lyon advanced to the last four of the Uefa Champions League on Saturday night after a 3-1 victory over Manchester City in Lisbon.

The French outfit, who were in seventh place when Ligue 1 was declared over in April due to the coronavirus pandemic, drew first blood after 24 minutes against the side who were runners-up to Liverpool in England.

It was well deserved on the balance of their early adventure in a one-off match against a team deemed their superiors and somewhat old school.

Fernando Marçal lobbed a ball over the top for Karl Toko Ekambi to chase, the City goalkeeper Ederson raced off his line to snuff out the danger but was left compromised by Eric Garcia's tackle on Ekambi. The ball broke for Maxwell Cornet who guided it around Ederson and into the gaping left-hand corner of the net.

Sleek after the knockabout and 1-0 to the underdogs.

City's leveller on 69 minutes was the stuff of purists. Raheem Sterling jinked his way past befuddled defenders down the left, paused and then cut the ball back as Kevin de Bruyne surged into the box. The Belgium international steered home sumptuously past Lyon goalkeeper Anthony Lopes.

But City failed to capitalise on their momentum and it was the Lyon substitute Moussa Dembélé who captured the headlines with a brace either side of a horrendous Sterling miss to send his team into the semi-finals for the first time in 10 years.

"It was a difficult match against a very big team," Dembélé told RMC Sport.

"When you're on the bench it's not always easy but you've got to keep your spirits up and make sure that when the coach brings you on you play your part.

"There's always this bit of sadness for a player when you don't start a match. But a match is long and as long as the referee hasn't blown the final whistle, there's always a possibility."

Rudi Garcia's men will take on Bayern Munich - 8-2 victors over Barcelona in their quarter-final - in Wednesday's semi-final.

"After the break the team came back and made a promise to try and give everything each time we're on the pitch," said Dembélé "We're still here and that means we're a great team."