Thomas Partey’s Atl. Madrid Out Of UCL After 2-1 Defeat To Leipzig 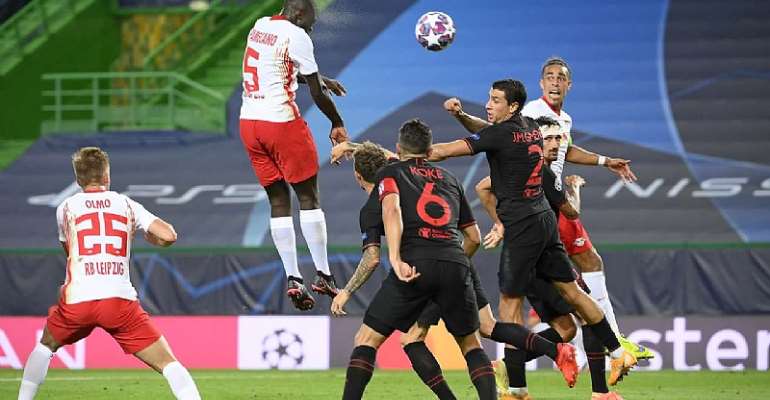 Thomas Partey’s Atletico Madrid side has been knocked out of this season’s Uefa Champions League competition after losing 2-1 to RasenBallsport Leipzig at the quarter-final stage.

The two clubs were in action at the Estadio Jose Alvalade this evening to fight for a win to advance to the semi-final stage of the elite competition which has taken a totally new format as a result of the Coronavirus pandemic.

Having recently recovered from an injury, Thomas Partey missed out on a starting role with his manager Diego Simeone naming him on the substitute bench.

As expected, both teams put up a good performance with a display of good tactical play. Unfortunately, neither could find the back of the net as the first half ended goalless.

After the break, Leipzig enjoyed a strong start and went on to take the lead courtesy a header from Daniel Olmo as he connected to a well-weighted cross from full-back Marcel Sabitzer.

Later in the match, substitute Joao Felix converted a penalty kick to restore parity for Atletico Madrid after Lukas Klostermann caused a foul in the 18-area of the German side.

The pulsating end to the match resulted in Leipzig carrying the day with Tyler Adams finding the back of the net from outside the box of the Rojiblancos with the help of a defection.

The result sees Thomas Partey and his Atletico Madrid outfit bowing out of this season’s Uefa Champions League competition.