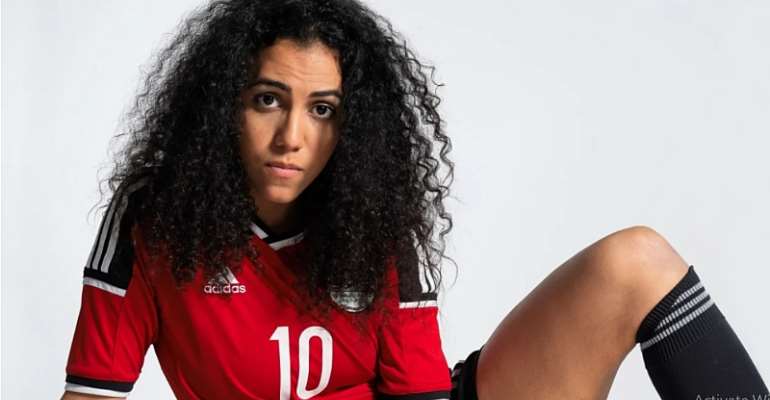 In a country that has an endless passion for football, she proved herself as the first Egyptian female footballer to ply her trade in England.

The 21 years old Egyptian wonder, Sarah Essam made headlines back in 2017 when she became the first Arab woman to play in the FA Women Premier League. She did not only join Stoke City but went further to finish the season as her side’s top scorer.

“I started from the zero point”, Sarah told CAFOnline.com.

“I had the dream of playing abroad from the very start and I knew I have to work hard. I started playing in an academy and my parents used to pay for my training. I took it very seriously and followed my coach’s words, and one day I was chosen to join the junior team which means I don’t have to pay anymore. Then I became the youngest player to be chosen for the first team. My plan was going on the right direction”.

Knowing well what she wants to do, Sarah started training three times daily! She continued training with the academy team while also having sessions with the Junior and First teams at the same time. “People called me crazy but I didn’t care. The coaches told me to train with the first team only, but I refused as I needed to train more. My dream was to have a chance in Europe”.

Her hard work started to bear fruits when she was recalled to the Egypt U-17 national team, then became one of the youngest players to don the “Lady Pharaohs” shirt.

But the journey was not an easy one for the young girl. She faced many difficulties to realize her dream of becoming a professional footballer with many seeing football as a men sport.

“Of course, wearing those football boots and walking with them in Egypt was a bit hard. Also when I joined a group of boys to play, most of them didn’t believe that a girl can play football just like them or even better. I used to see the funny look that they don’t want me to play because I could ruin their game. But this only made me insist more to play and change their way of thinking”, she added.

After playing basketball for some time, Sarah decided to concentrate more on football. And finally, she finally realized her dream of being the first Egyptian woman to play abroad.

“In 2017 I was playing for Wadi Degla and one day I had an offer to do trials in England with Sunderland, Derby County and Birmingham City. I was about to sign with Derby County, but in the last minute I had a call from Stoke City manager and we met together. He made me change my mind and I signed for Stoke instead.

“The first days were unforgettable. I felt I’m living my dream, but at the same time, I wanted to push myself even more in everything. I didn’t want to have the feeling that I reached the ultimate, but rather to feel hungry for more. I still feel the same”, she explained.

Sarah doesn’t only play football in England, but she also studies Civil Engineering. And in the same time, she still thinks of the women football future back in her country.

“It was a great honour for me to represent my country in such a young age. Unfortunately, our national team didn’t take part in international football since 2016. I’m optimistic this will change in the near future since CAF is giving more attention to women football. I would love to play for my country again, and also I hope Egypt will host Africa Women Cup of Nations soon”, stated Sarah.

The talented striker sees better future for the women game in Egypt, has the big clubs decided to adopt it. “To promote the game, we need to have women teams in clubs like Al Ahly and Zamalek. These are the biggest clubs in Africa and I believe they have to play their role in order to put our game in a much better place”.

Sarah’s idea coincides with CAF launching the Women Champions League in the continent, which she sees as a brilliant perspective.

“We have many talents in Africa and having a Champions League is something we deserve. But I believe there should be specific criteria for the participating clubs, so as to have a competitive tournament that gives the whole world a good impression about African women football”, she noted.

Sarah won the 2018 Arab Woman of the Year: Achievement in Sport award by the London Arabia Organization. She was also part of the commentary team for the 2019 Total Africa Cup of Nations in Egypt. Most recently she participated in the launching of CAF Women’s Football Strategy, #ItsTimeItsNow.

“My message to African women footballers is simple; believe in you and never compare yourself to others. If people say you can’t do something, make this a motivation. Never say it’s too late because you can always work harder. Struggling means you are on the right track so never give up and keep going until you make yourself proud”, concluded The Egyptian Queen, as nicknamed by her club Stoke City fans.