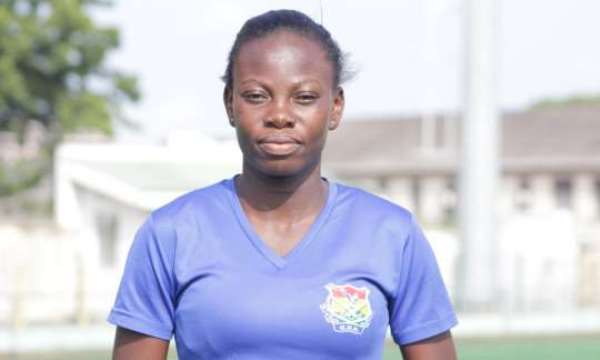 Umaru Nafisatu is a public servant with the Ghana Police Service as a Corporal and has the talent to play hockey, locally and international.

Her local club is the Ghana Police Service team where she is the amazing utility star.

Her idol is Luciana Paula Ahmad. Umaru loves listening to music and reading, with Banku with okro stew as her best dish. The car she likes most is V8 "I like big cars" she stressed. She only watches Sports programs on television.

She remembers Ghana vs Australia as her most memorable match and Ghana vs South Africa 2013 as well as against Kenya as her best moments.

A place she would love to visit always is Gold Coast in Australia.

On how she feels motivated, she said "mostly I am motivated by my aims and ambitions. I have my dad, Madam Elizabeth King, Gertrude Inkoom, and coaches Moses Kagochi and Edmond Zankoh as people who inspired me.

On the YEA Relief Package for 1,000 National athletes, she noted that" it's a good package which the Ministry has put in place to tell sportsmen out there that the nation also has sports as a priority.

On advising leaders and the youth, she said "I want the sports administrators to lift the sports that are known as lesser-known sports to known sports and also whatever is due sportsmen these criteria is given to them to motivate and lift sports and Ghana high in their respective discipline"

“They should continue to work hard and chase all their dreams because I believe sports will have a greater story to tell. Be disciplined, humble and dedication, determination and hard work with get them to where they want to be especially Discipline On And Off The Field

"The media should also help to make the lesser-known sports known by giving or broadcast their matches follow them nationally and internationally and reporting on all issues to Ghanaians affiliated to their sporting activities" she expressed.

Umaru was named Best African hockey player in 2015, as well as Best Female Athlete Ghana Sports Excellence Awards in 2015. She was the Best Hockey Player at the 41st Sports Writers Association of Ghana SWAG Award and Top goal scorer at the 2017 African club championship in Ghana.

She travelled to Italy and played for the Butterfly Hockey club for three months. She calls herself a professional hockey player and security officer.