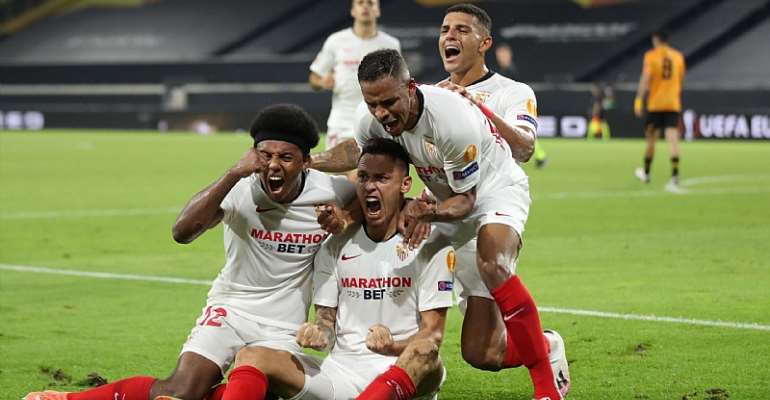 Sevilla set up a semi-final clash with Manchester United in the Europa League courtesy of a late Lucas Ocampos goal, as Wolves were made to rue a saved Raul Jimenez penalty.

Wolves were making their first appearance in a European quarter-final since 1972, but they started the game as underdogs against five-time competition winners Sevilla.

Nuno Espirito Santo's side were afforded a glorious opportunity to take an unlikely lead in the 12th-minute when Adama Traore won a penalty after another explosive run from midfield, but Jimenez's tame and indecisive spot-kick was saved by Yassine Bounou.

However, there is an argument that Sevilla's goalkeeper had moved off his line before the kick was taken, while at least one defender appeared to enter the box before Jimenez had kicked the ball.

A tactical tweak from Sevilla - who were unbeaten in a club-record 18 games - swung the tie in their favour and they went on to control almost total possession.

The Spanish side failed to create a clear-cut opportunity until midway through the second half, however, with the unmarked Jules Kounde heading over from Suso's cross.

Sevilla broke Wolves' hearts right at the death though when, with 88 minutes on the clock, the superb Ever Banega picked out Ocampos with an excellent cross and he finished with a smart glancing header to set up a semi-final with Ole Gunnar Solskjaer's side in the last four, ending the Molineux club's dream of European glory in the process.

Tunisians in largest rally against president's 'coup'
39 minutes ago