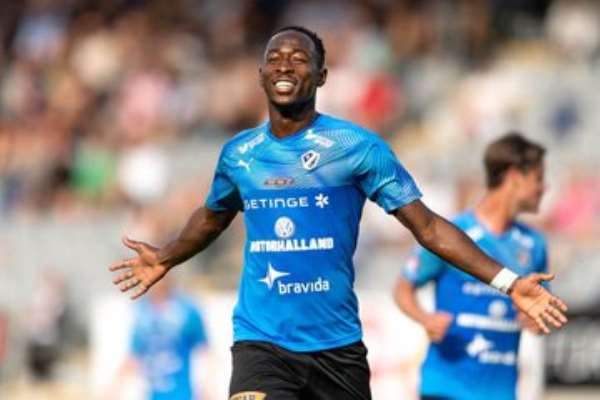 Ghanaian forward, Sadat Karim opened his goal-scoring account for the 2020 Swedish Superettan season today when he scored to power Halmstads BK to a 2-0 win against Oesters IF.

The striker was in action this evening for his team in their home match at the Örjans Vall against their Matchday 11 opponent.

Stepping up his fine form from previous games this season, Sadat Karim finally netted his first goal of the campaign when he fired in his effort on the 25th minute after he was assisted by Samuel Kroon.

That goal separated the two teams at the end of the first half with the home team dominating play.

Though Oesters IF impressed in the early parts of the second half, a 69th equalizer from Edvin Kurtulus after he was assisted by Karim Sadat doubled the lead for Halmstads BK.

Eventually, the hosts cruised to a deserved win as they bagged the maximum 3 points.

Sadat Karim, 28, has now scored 1 goal and has 3 assists after making 10 appearances for Halmstads BK in the Swedish Superettan.