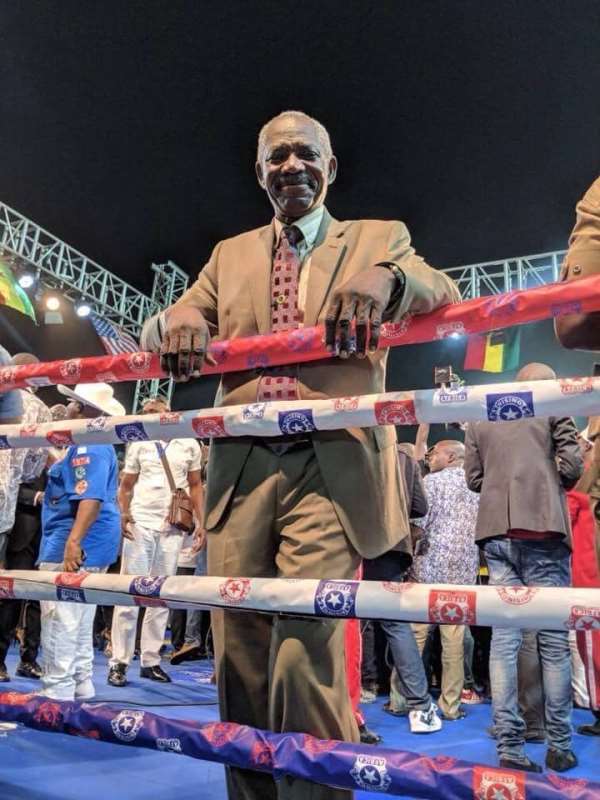 The name Yoofi Boham is as synonymous with Ghana boxing as is Azumah Nelson.

Boham has dedicated nearly 40 years of his life to helping the sport grow in his homeland. Boxing is his love—put his cells under a microscope and you’re liable to find zillions of tiny leather gloves floating around.

At 72, Boham hasn’t lost a step. He spends as much time talking about the sport as he did when he first discovered it.

Back then, Boham wore many hats. But as the times changed, so too did Ghana’s boxing sage.

“I don’t manage and promote fighters anymore,” Boham said during a recent sit-down with BoxingAfrica.com. “What I do now is advise fighters on what to do to get to the top.”

Boham served as technical advisor to Isaac Dogboe, whom he helped groom to become a world champion. He was also instrumental in the early stages of Richard Commey’s career before the former lightweight world champion teamed up with Michael Amoo-Bediako’s Streetwise Management.

“The focus is on making Wasiru a world champion now,” said Boham. “He is very talented and I believe with the right nurturing, he can go far.”

Boham’s life is a shining example of this. Born on January 23, 1948, in Sekondi-Takoradi, he grew up in the Brong-Ahafo Region, later settling with his aunt at Jamestown in Accra where he worked at the castles.

During the early 1980s, while still working at the castles, Boham met the man who would introduce him to boxing, Emmanuel Osabutey.

Osabutey, a retired boxing referee, was a customs officer at the time. When he was transferred to the Central Region, he asked Boham to oversee the Sparta Boxing Club at Abossey Okai in Accra.

“I quickly gained interest in the sport and secured a license to be a manager and promoter,” Boham recalled. “I got the required documents and my boxing career kickstarted.

“Many people from my family were surprised that I entered into boxing but they supported me through thick and thin. I got all the kid’s support as they all liked the boxers and attended most boxing events with delight. They were always interested in ensuring my shows were successful.”

“It is not easy to invest money into a venture without recouping and that was worrying. Ungratefulness on the part of some fighters really affected me and my family but in all, it’s been a great journey worth pursuing.”

Boham was determined to make it work. In 1985, he incorporated USA Boxing Promotions, signing featherweight George ‘Thunder’ Aryeh and bantamweight Ramos Agyare when they turned pro. He also hired the late Surprisor Sowah to train them.

“Thunder Aryeh was the best fighter in the gym at the time. They both became national champions in their respective divisions,” said Boham. “Agyare failed to win the African title but Aryeh became the first Ghanaian to win the Commonwealth title in two divisions.”

Aryeh and Agyare failed to make a significant impact internationally. Even so, Boham’s eye for talent was unmistakable. In 1988, he signed two Ghanaian Olympians, Ike Quartey and the late Alfred Kotey.

Both began their professional careers under Boham. However, Quartey parted ways with Boham after two years to join the renowned Ringcraft Boxing Promotions in 1990.

“I remember Ringcraft Promotions convincing him to sign with them,” said Boham. “Ike Quartey ditched me and joined them without any compensation to me. My wife wanted to take him to court.”

Quartey would go on to become the WBA world welterweight champion in 1994.

“Even though he treated me unfairly, I was happy that Ike Quartey became successful at the end. I was proud of him for what he achieved in the sport,” said Boham.

Boham had better luck with Kotey, who won the WBO world bantamweight title in the UK just one month after Quartey’s triumph.

“It was a great feeling for me that I won the world title as a manager. It remains my utmost achievement in boxing management,” Boham said.

He’s played vital roles in each administration. In the case of Foh-Amoaning, a renowned lawyer and broadcaster, it was Boham who convinced him to get involved with boxing.

Further, world champions such as Quartey, Kotey, Dogboe and Commey have all lauded his work in helping them to reach the pinnacle.

“It feels great to have played significant roles in the lives of these fighters who made their marks at the world stage,” said Boham.

Boham has also encountered the darker side of the sport—far too many times than he cares to mention.

“It is so common with fighters to let their managers and promoters down in Ghana and my career was no exception,” he admitted. “Most of them come to take advantage and then leave when they start making waves. It is very difficult to deal with such boxers.”

Yet Boham has no regrets. These days, he’s harnessed his energy toward making his latest client, Wasiru Mohammed a world champion.

But Boham’s dreams go beyond just personal achievement, it’s to see his beloved country continue to rise in his beloved sport.

“Fighters must train harder and avoid listening to people who are only in to destroy their careers. That is the only way to achieve success in everything one does.”