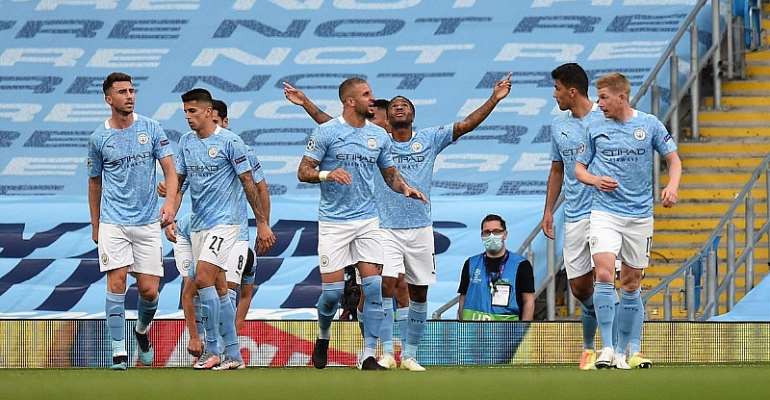 Raheem Sterling and Gabriel Jesus were on target as Manchester City kept their cool to secure their place in the quarter-finals of the Champions League with a 4-2 aggregate victory over Real Madrid.

Pep Guardiola's side held the advantage having recorded a 2-1 victory at the Bernabeu in the first-leg back in February, meaning Real needed to score twice without reply to advance in 90 minutes.

Their objective didn't change when Sterling opened the scoring for City after just nine minutes, but the goal would have had alarm bells ringing for Zinedine Zidane who watched Raphael Varane lose possession to the high-pressing Jesus who set the England international up for a simple finish.

City's pressure was relentless in the early exchanges, but Real - who had a week's longer break than their English counterparts - finally began to settle in the tie and in the 28th minute they reduced the deficit through a Karim Benzema header from an excellent Rodrygo cross.

The game ebbed and flowed at times in an exciting second-half but City fully deserved to grab the evening's all-important third goal which came courtesy of another mistake by Varane. The World Cup-winning defender sold his header back to Thibaut Courtois short and Jesus pounced to lift it over the Real goalkeeper with 68 minutes on the clock.

It was a thoroughly merited and convincing victory for City who set up a quarter-final tie with Lyon after the Ligue 1 side edged Juventus. They will be strong favourites to advance to the last four. Meanwhile, Zidane - who suffered his first Champions League exit as a manager - will reflect on a disjointed and uncharacteristically sloppy performance.