Soccer in Africa - a beautiful game 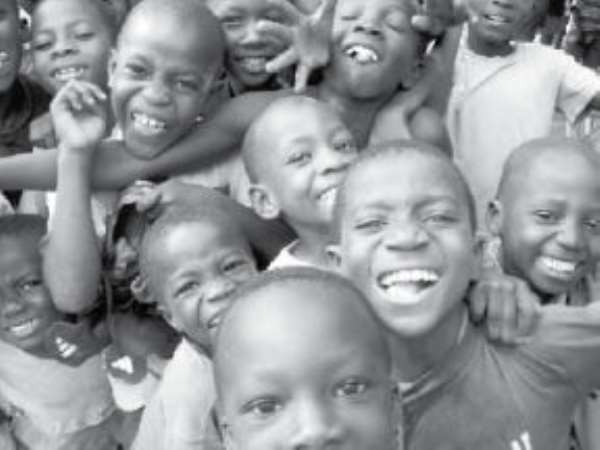 A program that uses soccer to teach life skills is creating fields of dreams in Ghana, West Africa.

"Not everyone speaks the same language in my country," says Charles Cobbina, Program Director for the non-profit group Play Soccer Ghana, "but we all speak football." His organization is using that passion for the so-called 'beautiful game' to help disadvantaged kids score a brighter future in the West African nation.

Play Soccer teaches life skills along with football skills to kids and youth at seven sites scattered around the country. One of them is in Ashaiman, a sprawling settlement on the outskirts of Accra, Ghana's bustling capital of two plus million.

It's Saturday, and the rough but ready soccer field, tucked behind a small school and a maze of cinderblock shacks capped with corrugated tin, is filling up with kids. Those with cleats lace them up while the game-day yellow jerseys are passed out.

At each site, Play Soccer teams up community volunteers with around 100 children - boys and girls aged five to 14. One of the volunteers at Ashaiman, a stern looking former army sergeant who has been donating his time for four years, barks out roll call.

While the coach gets his charges in line, Cobbina describes how Play Soccer works. "The kids meet once a week for three hours. They spend the first hour talking about various issues, from social concerns such as conflict resolution to health issues such as AIDS or the importance of clean water. Then they talk about soccer, learn the rules, and practice their skills: shooting, passing, that sort of thing.

"Then they spend an hour exhausting themselves, playing soccer."

Cobbina is a former teacher who has worked with a number of community groups in Ghana. He is now working through CUSO, a Canadian non-governmental organization active in 25 countries. While most of CUSO's development workers hail from Canada, there are a growing number of in-country volunteers; Cobbina is a born and bred Ghanaian assigned to Play Soccer over a year ago.

He recognizes the appeal and potential of soccer. "There's an art to the game, a team culture, and it's perfect for a country like Ghana. Football is not expensive - you can play with an orange or a rolled-up sock. Kids play it everywhere, and Ghana is producing some very fine players. Just look at what we did at the World Cup."

At that huge sport spectacle, held in Germany this past June and July, Ghana was not expected to make it through the opening round. But they played an up-tempo game and upset heavily favoured Czech Republic. The Black Stars then beat the Americans before losing in the knockout round to perennial favourites Brazil.

Play Soccer is free for the participating children. And the benefits flow beyond the boundaries of the football field. Cobbina realizes that the well-being of the children is tied to the economic status of their parents. Volunteers are given training in community development, and the organization is piloting a micro-enterprise program where they work with other NGOs to provide small loans to the entrepreneurial poor.

"Our focus in on the children," explains Cobbina, "but we know that to secure their future we have to help the parents. The parents have to be able to afford to send their kids to school."

While social and economic goals are at the heart of Play Soccer, football is the emotional draw for the kids. The rousing weekly games are what they look forward to the most.

The soccer pitch in Ashaiman is uneven, and one corner is a mushy carpet of grass and mud after a heavy rain. For goalposts, faded fishing nets are strung between rough wooden poles. But to the kids, this is their World Cup stadium, where they get to run and sweat and indulge in dreams beyond the ordinary playing fields of their lives.

The kids are divided into age groups, the balls are pumped up, and the games begin. While the main match is underway, other kids break into ad hoc teams for sideline scrimmages. Laughter, grunts, taunts, and exuberant cries of 'goooooaaaaalllll' sing out across the field. Those taking a time-out pick up a book from the 'mobile library' that emerges each week from a large sports bag.

Yearly tournaments are a highlight of the program, and a group of kids from Ashaiman are defending champs. "I'm the next Zidane," one boy says, proudly holding up the trophy and evoking the name of the French soccer super-star of Algerian descent.

This article and picture courtesy of Cuso's Ideas.