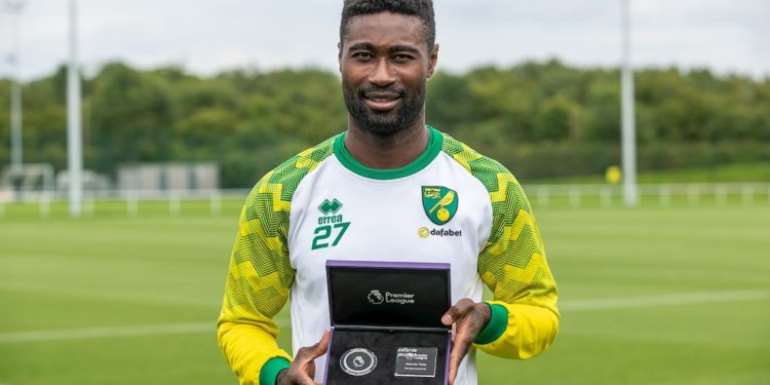 Defender Alexander Tettey has been presented with a special award for reaching 100 appearances in the Premier League.

The Norwich City vice-captain became a Premier League centurion when he started July’s 1-0 defeat to Chelsea at Stamford Bridge.

Speaking to the official club website upon the presentation of his award from the Premier League, Tettey said: “I wasn’t setting any targets when I first came to the club, but I should have played more than 100 games if not for my injuries!

“I’m still happy that I’ve managed to play 100 games for this club in the Premier League. I’m very pleased with that.

A Premier League career spanning that many matches is bound to be full of highs and lows, and Tettey cites a certain 3-2 win at the Etihad Stadium as one of his personal favourite moments.

“Us staying up and beating Man City away at the end of the 2012-13 season was the highlight for me,” he said. “Scoring the goals has been good as well.”

One of ‘the goals’ will forever be ingrained in Carrow Road folklore, March 22, 2014, the date when the Norwegian absolutely thundered a volley into the top right corner against Sunderland.

“The crowd shouted ‘shoot!’ I listened for a while and then tried my luck,” Tettey recalled. “That goal will be on Sky Sports for a while so it’s nice! That’s the one people look at and remember most and I’m very happy I managed to score a difficult goal like that.

“Norwich is my favourite club that I support, but Manchester United is my number two, so to go there and win and the score was a day I’ll always remember at Old Trafford! It wasn’t my best goal, but I had to improvise with a toe-poke and I liked it!”

We hope Tettey hasn’t made his last Premier League appearance in yellow and green, but for now, the midfielder just has his sights set on helping the Canaries to Championship glory in any way he can.

“My target for next season is to just give everything, whether that’s to cheer people on or give them a bottle of water – whatever it is to push everyone as hard as we can to see where we can reach – hopefully bouncing up straight away.”

Tetteh has played for the Norwegian national team, earning 34 caps.