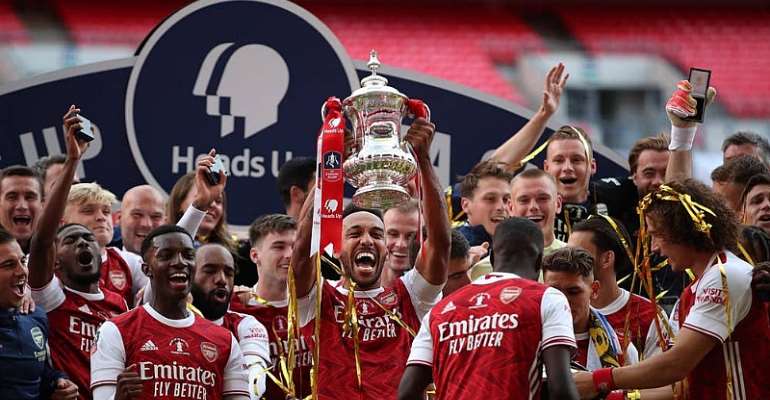 A double from Pierre-Emerick Aubameyang secured Arsenal European football for next season, steering the Gunners to a record 14th FA Cup triumph after a 2-1 victory over 10-man Chelsea in the final at Wembley.

Chelsea started the game in the ascendancy, with Christian Pulisic becoming the first American to score in a FA Cup final when brilliantly giving Chelsea the lead with just six minutes on the clock.

After the first-half drinks break, Arsenal looked like a different side, and got themselves level from the penalty spot, with Aubameyang winning the penalty before getting up to slot home his 29th goal of the season.

The goal that won the contest was worthy of the grandest of stages, with Aubameyang brilliantly skipping past Kurt Zouma before clipping a lovely finish into the net in the 67th minute, with Mateo Kovacic’s somewhat controversial red card making Arsenal’s task of earning Mikel Arteta his first silverware as Gunners boss all the more easier.

Right from the off, it was clear that defences were not going to come out on top in this final played in the surreal surroundings of an empty Wembley, with Chelsea causing Arsenal all sorts of problems early on.

Looking to end a poor run of just one win in 13 FA Cup matches against Arsenal, Pulisic’s brilliantly taken opener after a fine, flowing move put Chelsea in strong early position, with several chances coming and going for the Blues to add a second.

The Gunners needed a regroup, and the drinks break provided that, with Arsenal looking a different side after a chat with Arteta. The equaliser soon followed, with Aubameyang too quick for Azpilicueta, who hauled down the Arsenal striker to concede a penalty, expertly put away with the Gunners’ leading marksman.

The second half lacked the intensity of the first and it looked like a moment of magic was going to be needed to settle the contest, and in Aubameyang, Arsenal had that world-class showman to produce the goods. The footwork to fool Zouma was exquisite, and the finish sublime in the extreme.

Chelsea did not really look like getting back into the match, but Kovacic's second yellow card, which on second viewing looked a little harsh given Granit Xhaka appeared to make a meal of it, effectively ended their fight, as Arsenal snatched that last Europa League spot for next season, at Wolves' expense.