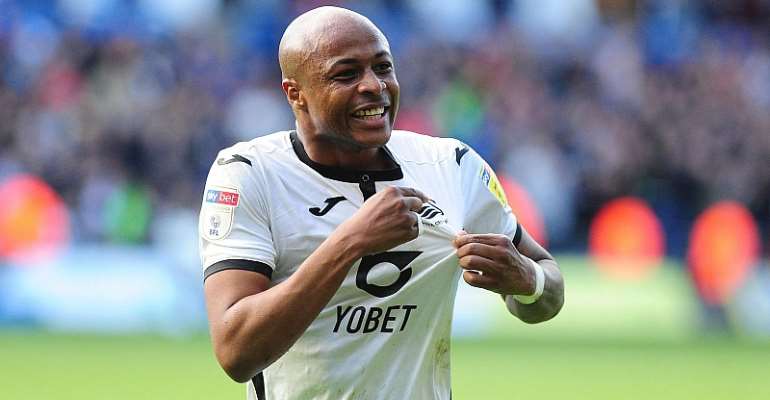 Swansea City boss Steve Cooper is to discuss the future with Andre Ayew after admitting the forward is too good for the Championship.

Ayew, 30, starred for Swansea City in 2019-20 after returning to Wales following a loan spell at Fenerbahce.

Ayew has a year to run on his sizeable contract but may move on after Swansea missed out on promotion to the Premier League.

“I think that’s a conversation me and Andre need to have,” Cooper said.

“I would like nothing more than for Andre to be playing with us again next season.

“We have seen the real level of player he is this year, with the goals he has scored and the impact he has had on and off the pitch. It’s been brilliant to work with him.

“But I understand Andre is a better player than the Championship. That’s a matter of fact and I am sure he will have offers to do that.

“We need to have a good conversation over the next couple of days. We trust each other 100 per cent and in the end we will come to a resolution that’s right for everybody.”

Signed for £18m when Swansea were in the Premier League, Ayew is the club’s top earner by a distance.

He has shone under Cooper, scoring 18 goals and claiming seven assists in 47 appearances.

But with cost-cutting continuing at the Liberty Stadium in the wake of top-flight relegation in 2018, Swansea may be forced to sell the former Marseille and West Ham forward.

There has been interest in Ayew from clubs in the Middle East, although the player may be more tempted by a move to one of Europe’s top leagues.

“I understand that it’ll be a talking point, whether he stays or goes,” Cooper added.

“Whatever Andre decides to do, he will have thought about it long and hard about it, that’s for sure, and we’ll see where it goes.”