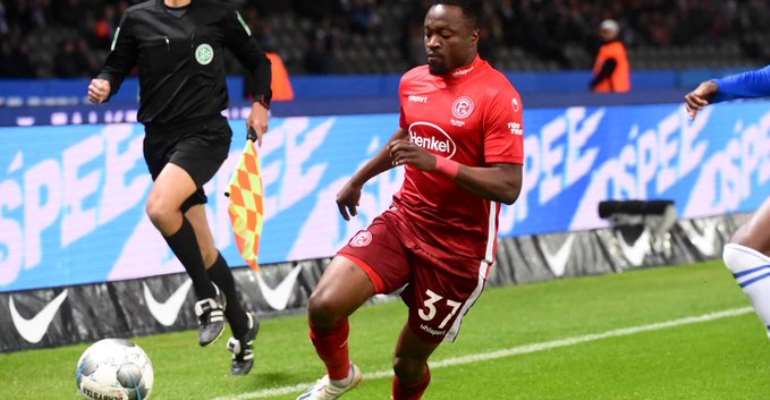 After Düsseldorf suffered relegation, the Ghanaian striker revolted against the club by not turning up for training and failing to honour his contract with the club.

Tekpetey was banned from training with the club’s first team after rebelling against the club in their attempt to tie him up to a new contract.

On Thursday morning, the club confirmed its decision to part ways wit the wantaway attacker from the club and is now free to join any team of his choice pending agreement with his parent club Schalke 04.

A club statement reads, "Bernard Tekpetey's transfer is on the home straight. In order to clarify the last details, Fortuna Düsseldorf has released the player for today's Thursday."

The 22-year-old made nine Bundesliga appearances in the Düsseldorf colours and provided just one assist in the season.

Meanwhile, Tekpetey's parent club, Schalke 04 ar ready to recall the player ahead of the new season.

Tekpetey had a tremendous loan spell at SC Paderborn in the Bundesliga II where he played an instrumental role in their qualification to 2019/20 German top-flight season after netting eleven goals with seven assists in 36 game outings.

Th forward has capped two times for the senior national team of Ghana after earning a call-up to the 2017 Africa Cup of Nations.

‘Sputnik-V procurement contract must be re-examined’ – Kwaku...
7 minutes ago

Getting Sputnik-V vaccines from black market using middlemen...
7 minutes ago