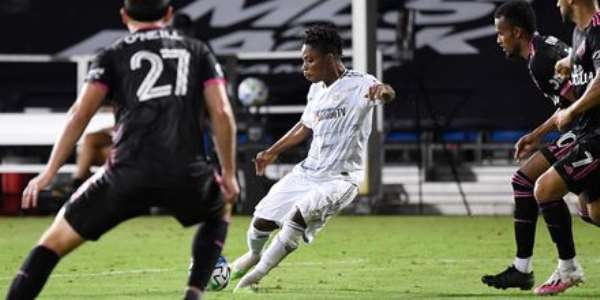 Ghanaian international Latif Blessing scored on Tuesday morning to help his Los Angeles FC outfit to defeat Seattle Sounders 4-1 in the ongoing ‘MLS is Back’ tournament.

In a highly-anticipated fixture between the two clubs, it produced a very good game with the visitors proving to be the better side at the end of the 90 minutes.

On the Matchday, Ghana’s Latif Blessing scored the second goal for Los Angeles FC on the 39th minute when his shot deflected off defender Shane O'Neil and into the back of the net.

A brace from Diego Rossi and an equalizer from Brian Rodriguez completed the resounding win for LAFAC with Will Bruin netting the only consolation goal for Seattle Sounders.

Check out Latif Blessing’s goal in the video below:

Bawumia's campaign allegedly being financed by NDC to kick a...
37 minutes ago